There are three main groups of Fibonacci patterns:

(1) we have three point patterns like retracements and extentions, 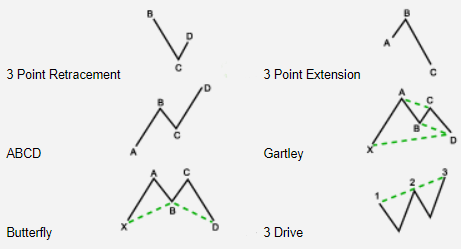 Fibonacci retracements and extensions plot possible levels of support and resistance.  Fibonacci price levels are created by tracking a price’s primary move and its retracement.

Fibonacci retracements and extensions are used by traders identify possible support and resistance levels in situations when such levels are difficult to identify.  Traders use them to determine critical points where an asset’s price momentum is likely to reverse.  They’re also used to place stop-loss orders and set target prices.

All 3 point retracements are emerging four-point ABCDs, and many 4-point ABCDs are also emerging five point Gartlies or butterflies.  This is because the patterns with more points contain or are made up from patterns with fewer points.

The way to recognize that you are looking at an emerging Fibonacci pattern is also the color of the direction arrow.  If it is grayed out, the pattern is emerging, but a more obvious feature is the pink dot on emerging patterns.

Unlike with chart patterns or emerging patterns that can be straightforward opportunities to trade, with Fibonacci patterns they really are just an early warning signal.  Because for the opportunity to realize (complete pattern), two things still need to happen. First, the price has to rise to the level of the pink dot. Time is not that important.  It can reach the level before or after the dot, as long as it is on that level.  Second thing that needs to happen is that price should encounter support or resistance at the level of the dot, depending on whether it is a bullish or bearish pattern.  Only if the price reaches this level and turns around at this level, then the expectation is that there will be support or resistance at the Fibonacci levels that follow. 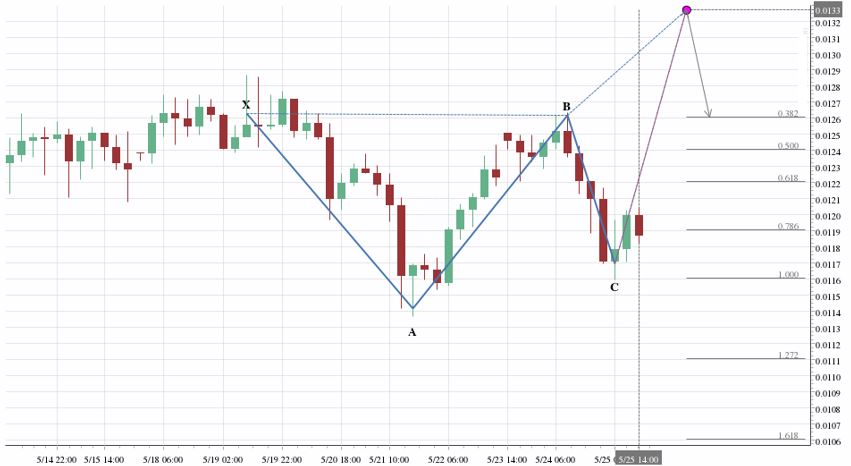 Because of the many requirements for a Fibonacci emerging pattern to complete, there are many of them that never do.  As a trader, the ones that will be of more interest to you would be the higher-order ones: the five point Gartley and butterflies, because they are more valuable patterns.  And the way they fit with the Fibonacci theory by meeting a considerable number of requirements, you are increasing your odds for trading in the right direction.