Pattern: Price is trading in a Sideways Channel , which is a neutral pattern (indication of market indecision). Trend Traders ought to wait for a breakout in either direction, although typically it breaks in the direction of the existing trend. Swing Traders can trade the range – Enter near Support and Exit near Resistance. 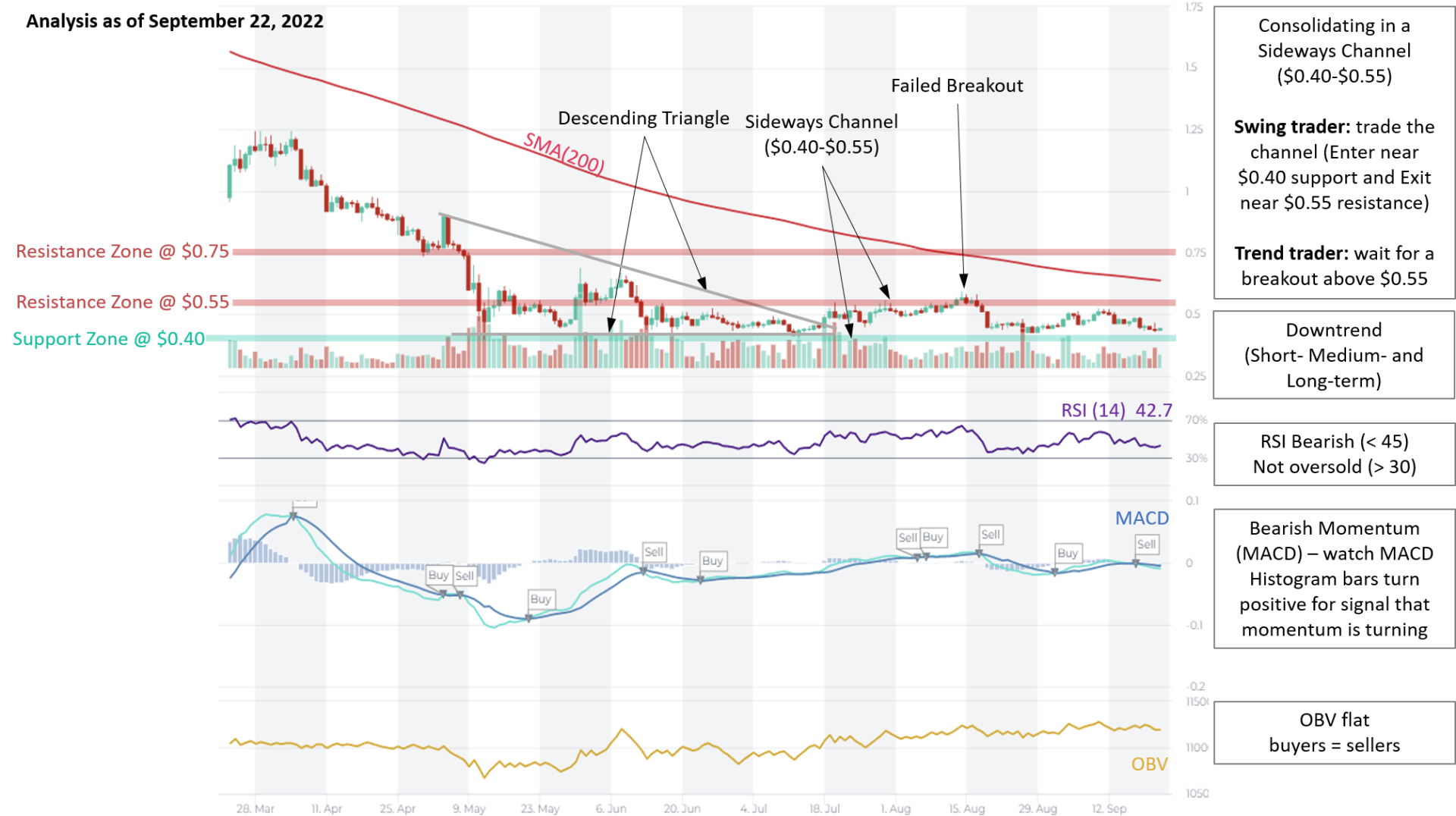 Here’s why Cardano (ADA) average transaction fees are up 1,500% in the past year

Hoskinson: These are the circumstances in which Cardano (ADA) and Solana (SOL) will collaborate

How Will Cardano Change DeFi Forever?

Cardano and Polkadot Report a Jump in Weekly Cryptocurrency Inflows

Cardano Is In A Range-bound Move, Unable To Break The $1.50 Overhead Resistance

What is Cardano (ADA)?

Cardano is an open-source, smart-contract platform that aims to provide multiple features through layered design. Its modularization will eventually allow for network delegation, sidechains, and light client data structures. It uses a version of Proof-of-Stake (PoS) called Ouroboros to secure the network and manage the block production process. The network features a native token called ADA that gives stakers a claim on new issuance in proportion to their holdings and allows users to pay for transactions.

Cardano is an open-source blockchain originating from peer-reviewed academic research. It does not have a single published white paper but is developed from a collection of academic papers. Cardano sees itself as a “third-generation” protocol, improving on Bitcoin and Ethereum as the first and second generations, respectively. It is named after an Italian Renaissance mathematician, Gerolamo Cardano, and its native currency ADA is named after Ada Lovelace, a 19th-century mathematician sometimes referenced as the first computer programmer.

Cardano is backed by three entities: IOHK, The Cardano Foundation, and Emurgo. IOHK is a blockchain research and development company founded by Charles Hoskinson and Jeremy Wood that is contracted to work on it from 2015 through 2020. The Cardano Foundation is a non-profit organization focused on core development and ecosystem growth. Emurgo is a Japanese venture capital firm. Cardano’s full launch will consist of five phases: Byron, Shelley, Goguen, Basho, and Voltaire. The Byron era arrived in September 2017 with the mainnet launch of the Cardano blockchain. During this phase, the chain operated as a federated network that only supported ADA transactions. The next phase, Shelley, launched in July 2020, bringing Cardano’s proposed Ouroboros Proas Proof-of-Stake (PoS) protocol to life. It’s now in the process of rolling out its third phase, Goguen, which will add support for smart contracts and native token issuance. The development teams, IOHK and Emurgo, are researching and building the network’s remaining phases, Basho and Voltaire, in parallel with Goguen.

The Cardano blockchain has two layers: a settlement layer and a computation layer. The Settlement Layer (CSL) serves to settle transactions made by peers in the network with ADA, its native currency. The Computation Layer (CCL) is optimized to support smart contracts and decentralized applications. Developers chose a layered protocol to increase the network’s capacity for protocol changes and soft fork implementations. Cardano is developed in Haskell and smart contracts are created in Plutus, another programming language that allows for building stricter contracts.

Supply of ADA is capped at 45 billion. The current ADA supply is roughly 31 billion, which leaves a remaining 14 billion for network incentives. Cardano incentives compensate for the network’s decrease in monetary expansion. Incentives increase as network use increases.

Cardano will use a Proof-of-Stake (PoS) consensus mechanism called Ouroboros once it reaches the “Shelley” era. Ouroboros consensus aims for improved network security and modularized design. Its modularization allows for network delegation, sidechains, and light client data structures. Ouroboros design Ouroboros consensus is determined by slot leaders who are elected by token holders with a sufficient stake in the network. Slot leaders operate in epochs to listen for and confirm transactions to produce blocks, which are then approved by input endorsers. A Cardano input endorser is the second set of stakeholders that verifies transactions included in blocks. It’s believed this design is scalable since the network can increase the number of slots per epoch and run multiple epochs across the network simultaneously.