LTC (LiteCoin) is in an Uptrend across all three time horizons (Short, Medium, Long).  We first highlighted the big tailwinds from PayPal user demand on Oct-29 (read here). PayPal’s impact is just getting started as the company gradually enables 360M users to buy four crypto assets (BTC, ETH, LTC, BCH).  Short term trend is highlighted by Higher Highs and Higher Lows, which also formed a Channel Up trading pattern.  As we noted in our TA update on Nov-13, LTC was poised to surpass this year’s high of $68, which it did shortly afterwards.

Price decisively broke through a $65 resistance and, recently, even through the upper Channel trendline. Trend following traders would simply stay put here, riding this uptrend until it breaks below the Channel Support Trendline.  Swing traders could trade the channel (Buy Support Trendline and Sell Resistance Trendline). Momentum indicators, MACD and RSI, remain bullish (MACD crossover and RSI > 50), yet not overbought. OBV is rising, indicating that the demand for LTC coins is higher than supply (volume on Up days exceeded volume on Down days).    LTC is set to go higher yet. 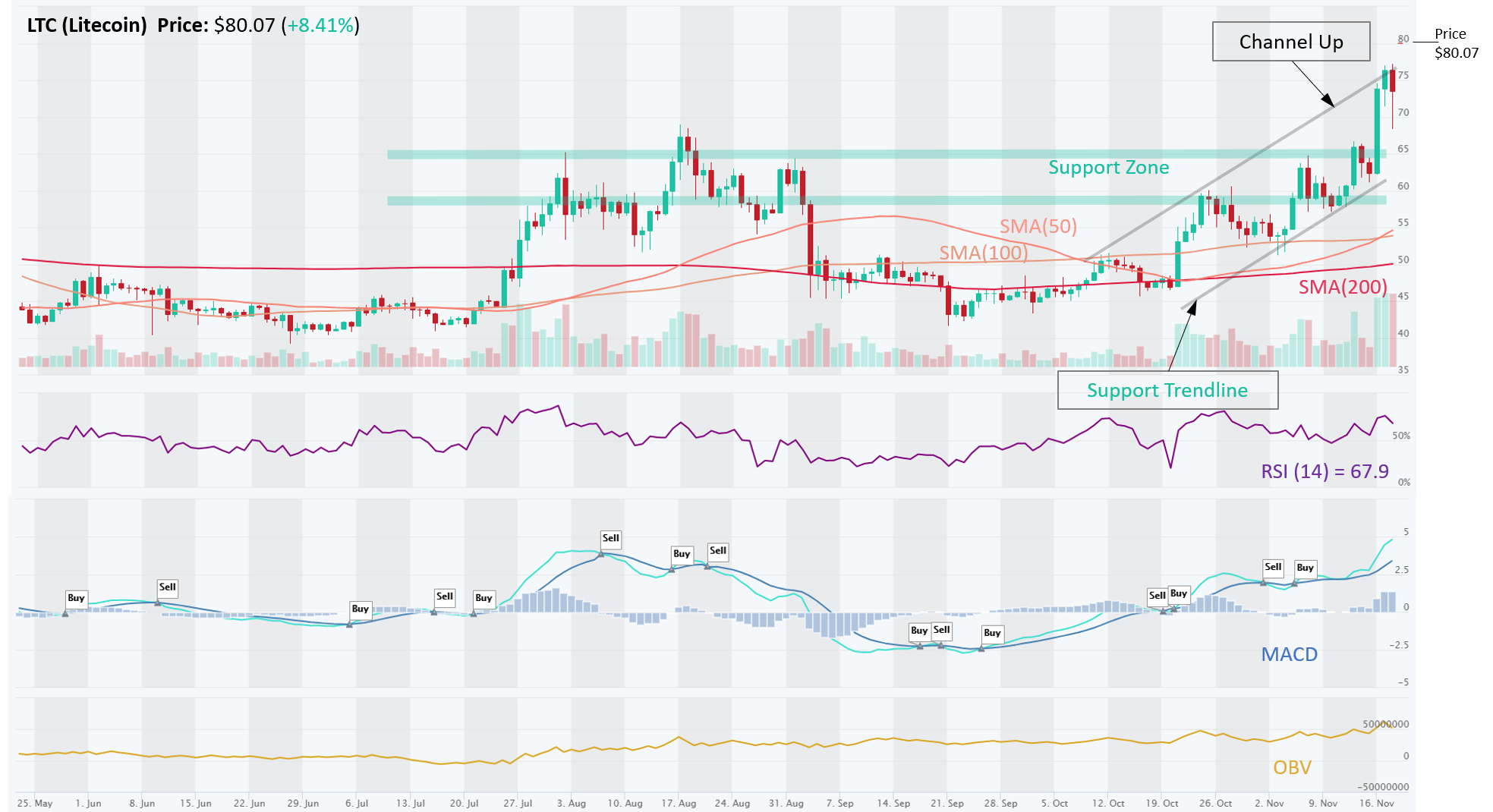 DCR (Decreed) is in a modest Long-Term Downtrend, but its Medium- and Short-Term are in a Strong Uptrend.  After consolidating in a range in September and October, DCR began a steady ascend, breaking through multiple Resistance Zones that have now turned into Support Zones at $12.5, $15 and $17.5.  Trading in a bullish Channel Up, this coin has the momentum (RSI > 50, MACD Crossover signal) and big volume (OBV) to propel it to new highs this year.  ADX of 55.2 is well in the Very Strong trend strength territory. 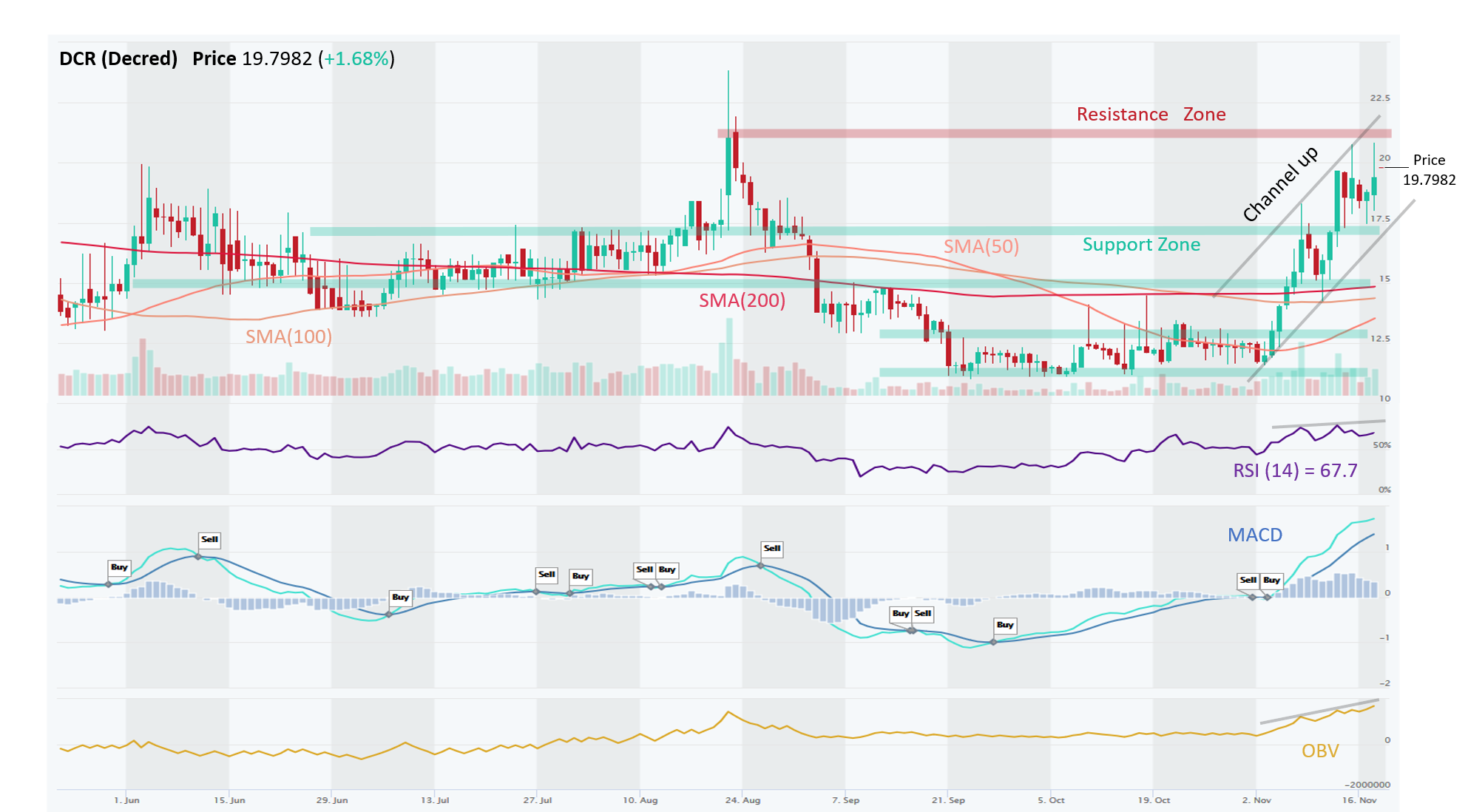 OCEAN – Solid Uptrend, Though Some Loss of Momentum Recently Could Squash Attempts to Break Into New Highs in 2020

OCEAN (BurstOcean) is in strong uptrend across all time horizons (Short-, Medium-, Long-Term).  After a monster August (as did most altcoins), OCEAN formed a Double Top, a bearish reversal pattern, which along with a MACD Sell signal served as a warning that trend was changing.  In September and October, price consolidated in a tight sideways range ($0.30-$0.40) and finally broke out to the upside in late October, with huge volume, which confirmed the breakout.  During November, price has been making Higher Highs and Higher Lows, a steady textbook Uptrend.

Momentum is modestly losing steam, however, with RSI declining recently and MACD also in a bearish crossover (below Signal Line).  Moreover, OBV is also indicating some loss of interest from buyers as volume on Down days has recently exceeded volume on Up days.  If the price holds above the Support Zone at $0.50 and its Trendline Support of $0.52, it will get another chance at breaking through the Resistance Zone at $0.63-$0.65 and start making new highs for 2020.  Mind you, that Resistance ($0.63-$0.65) has rejected OCEAN’s advance of three occasions in recent months. 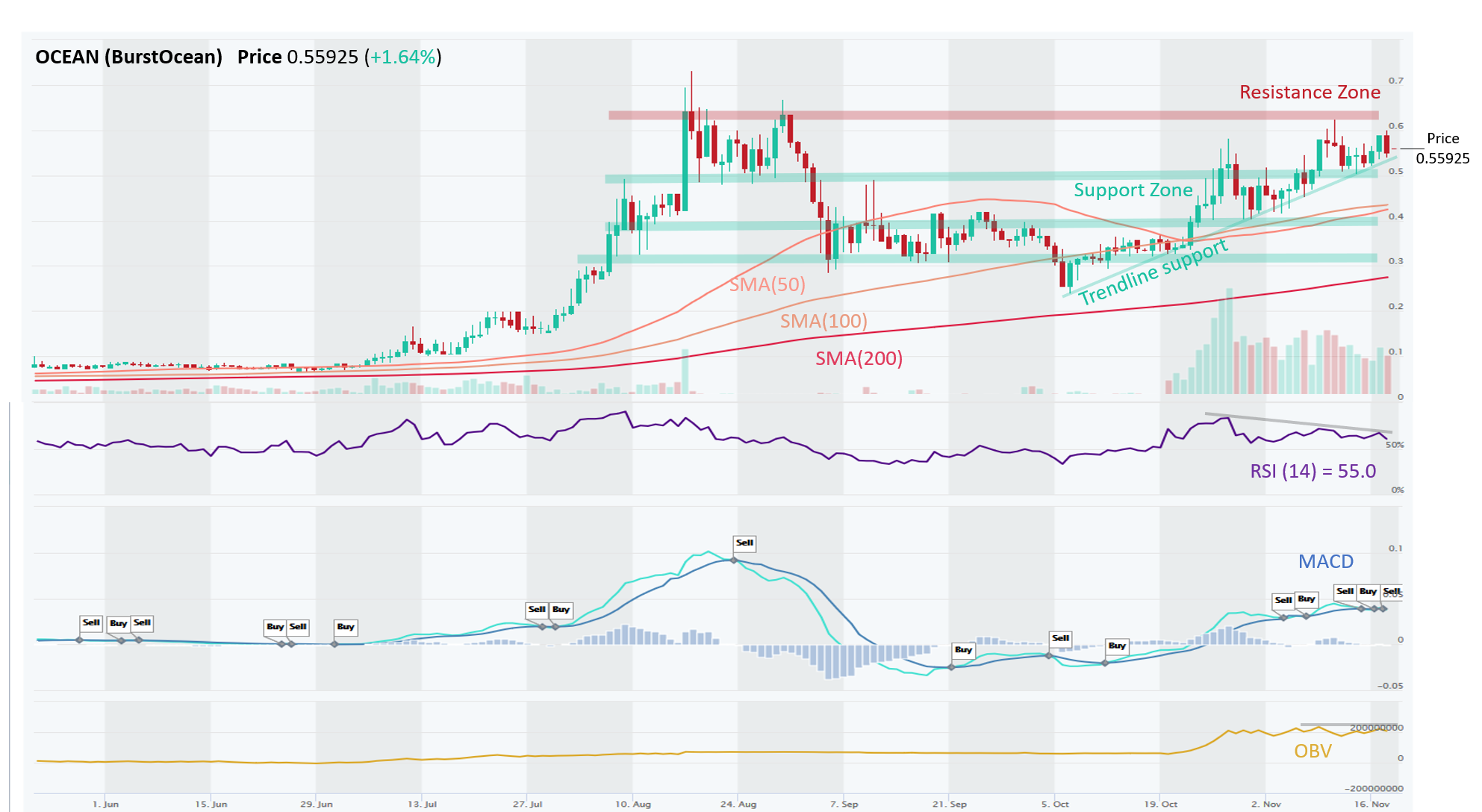