By now, most of us have heard that PayPal will enable buying and selling of cryptocurrencies in the coming weeks in the U.S. and select international markets in the first half of 2021.  Initially it will include four crypto staples: Bitcoin (BTC), Bitcoin Cash (BCH), Ethereum (ETH) and Litecoin (LTC).  Let’s call them the Fabulous or Fab Four.

It cannot be overstated that this is a major leap in crypto’s utility. Over 346 million active PayPal users will be able to use their cryptocurrency balances to pay for goods and services with 26 million merchants worldwide!

For traders, this means that Fab Four will have big demand tailwinds in the next 6-12 months as PayPal users, especially millennials, begin to buy up these coins.  And we suspect that other payment card competitors to PayPal and Square (Cash App) are not far behind in their own cryptocurrency initiatives.

General public is eager to dip their toe in the digital assets, but for most, it still remains out of reach due to its complexity and lack of trust.  PayPal takes all of that complexity and uncertainty away.

We believe that demand for the Fab Four could drive their prices substantially higher over the next 6-12 months.

Familiar with the “Coinbase effect”? whereby coins that get listed on Coinbase exchange tend to get a surge in demand even ahead of that listing?  Well, take that and multiply it by 10x or 100x?  PayPal has 346 million users!!  Coinbase has maybe 30 million?  Call it “PayPal effect”…

Now let’s take a look at the Fab Four from a technical analysis standpoint.

Litecoin (LTC) broke through it’s resistance at $51 on Oct 21, which was followed by another three big volume days, confirming the breakout.  Even prior to this, the price was forming a solid short-term uptrend with a couple of Higher Highs and Higher Lows, which is text book definition of an uptrend.  See chart below.  MACD is indicating solid momentum (signal line crossover) and RSI is not overbought yet (under 70).  The price is consolidating around it’s support zone of $54-55, which appears to be a solid entry point. 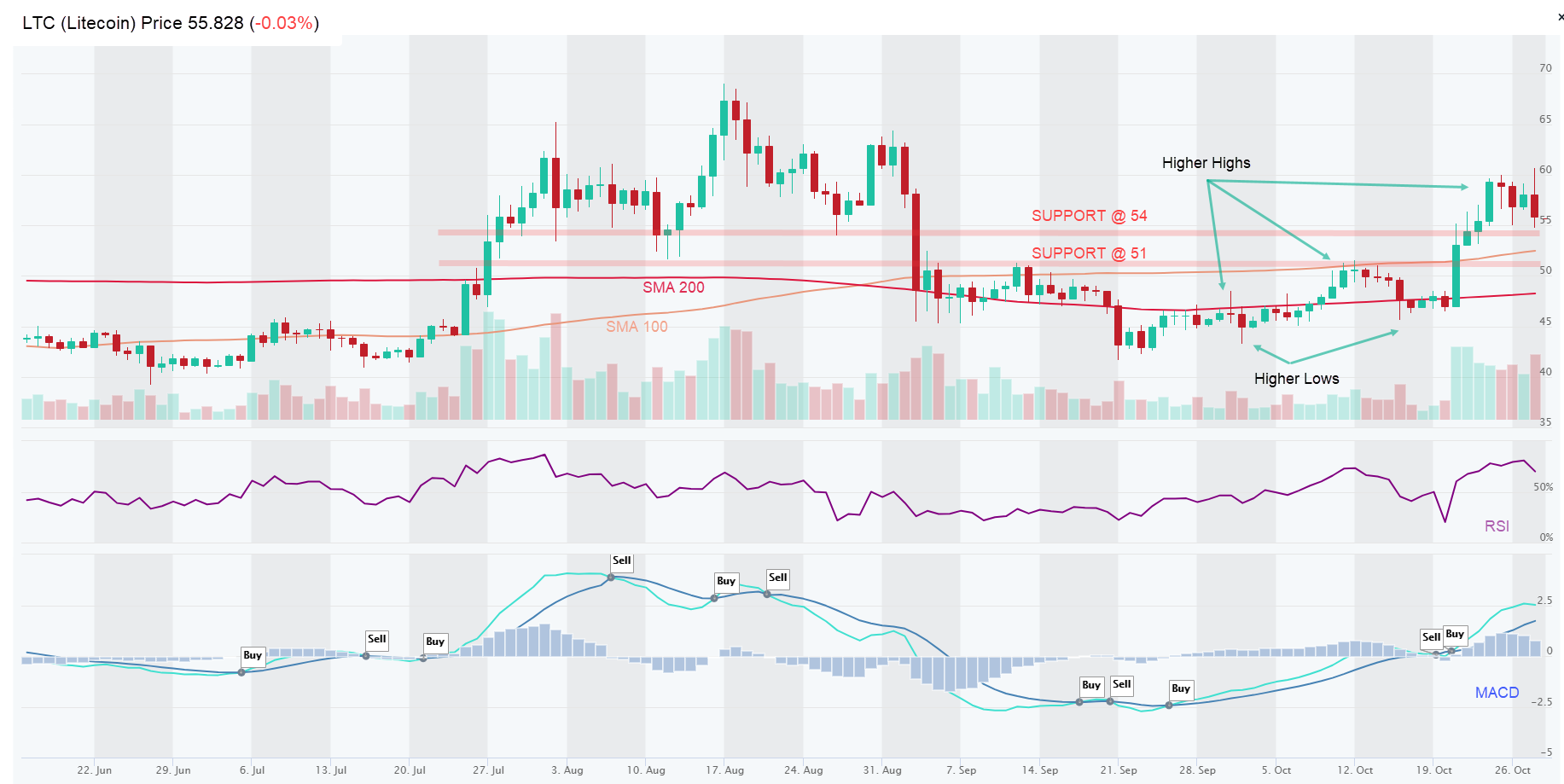 Bitcoin Cash (BCH) has an interesting setup, because it is trading very close to both SMA(100) and SMA(200) and trend line support, which increases the probability of BCH respecting this support level. Moreover, it produced a fresh MACD buy signal and with RSI still below 70 it has very decent potential for continued bullish action.  Similar to Litecoin (LTC), it has also nicely formed a short term uptrend recently, with Higher Highs and Higher Lows. 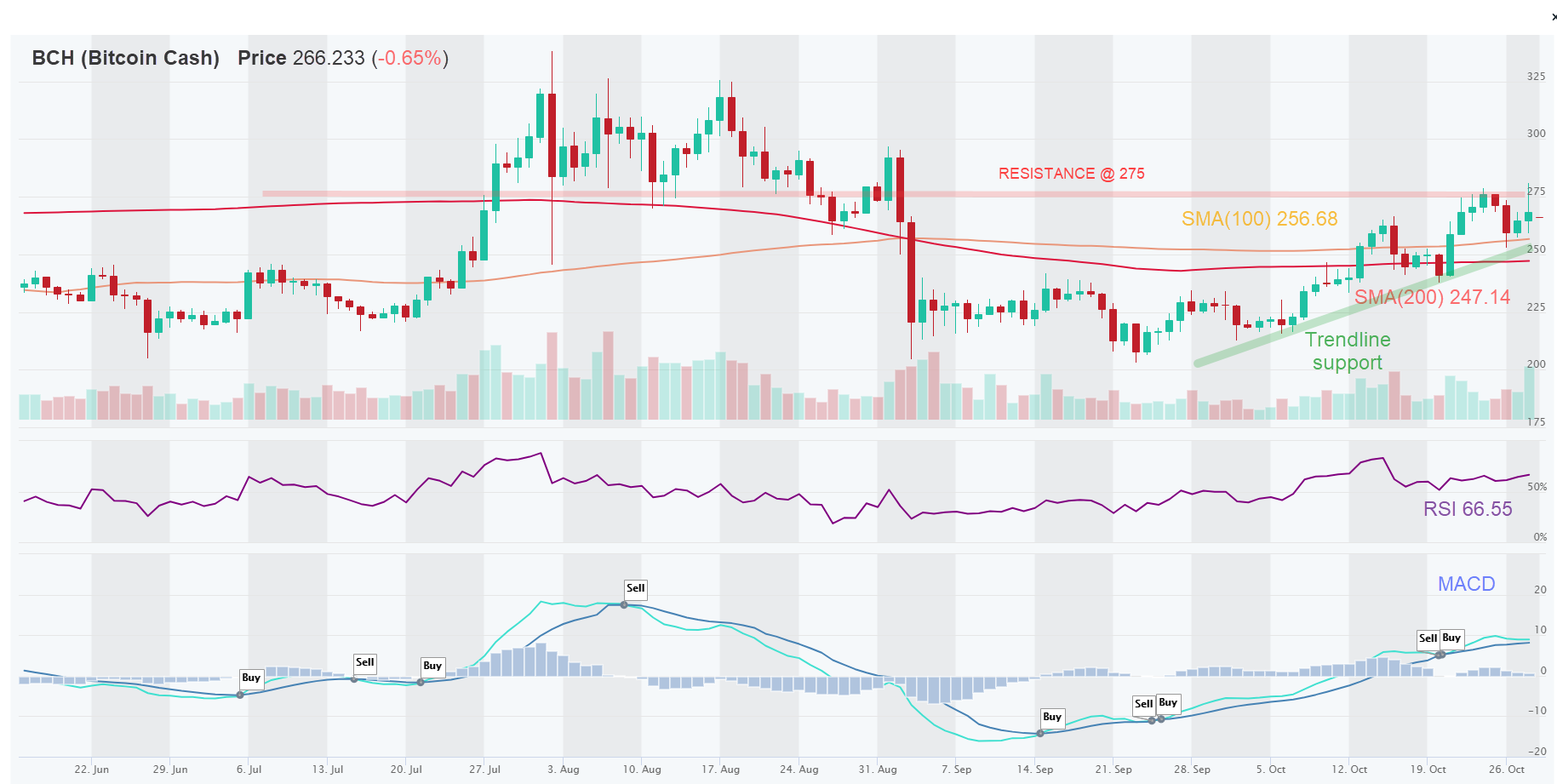 Ethereum (ETH) broke through the $400 resistance for a few days but has pulled back, which could be an opportunity because it now sits on its SMA 100 and Trendline Support which it has respected on three recent occasions.  Similar to Litecoin (LTC) and Bitcoin Cash (BCH), it has formed a solid uptrend now with Higher Highs and Higher Lows.  It seems poised to break through the $400 resistance area in the near term.

Bitcoin (BTC) broke resistance at $12K and charged through $13K and made new highs this year.  With no real resistance to serve as a guide, we check the Fibonacci retracements theory, based on which, we’ve reached a 61.8% retracement from the 2017’s all-time high and this level also coincides with high from June 2019. Also, we note that RSI is quite overbought, but if this resistance is taken out, then path to $16,300 is clear!

Risk management – Stop Loss and trade size. Traders should use Stop Loss orders to manage their downside risk, in case the trade goes against us, as it often will. Trading is about probabilities and even though these setups have a high win rate, one must be prepared to minimize losses on the trades that go bust. If Stop Loss order types are not supported by they exchange, at least set up a price alert (see video). Also, trade size should be such that you never risk losing more than 2% of your total equity. Keeping the trade size small allows the trader to setup a wider Stop Loss, which gives the trade more room and time to complete with success. Setting Stop Loss levels too tight can often result in getting knocked out of a trade prematurely.