TRX – Stuck in a Range, Waiting for Breakout

TRX is in a Downtrend on a Short- and Medium-Term basis.  More recently, the coins appears to trade in a range between $0.0275 and $0.0240, which could be traded (Buy Support, Sell Resistance).  For a bigger move, however, we are waiting for a breakout either way out of the channel.  Recently, the channel has narrowed, which could indicate a near-term breakout (Up or Down) is looming. 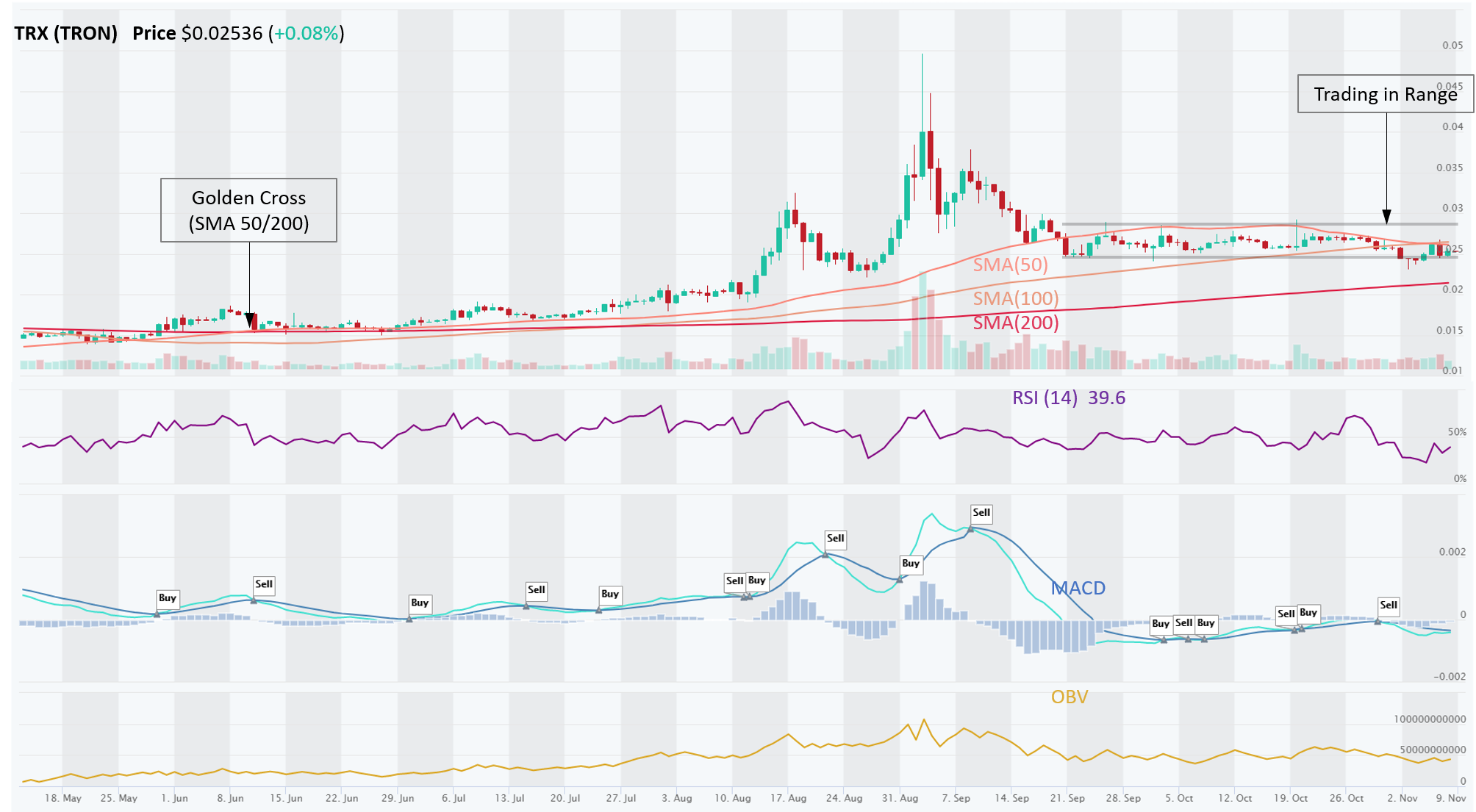 CRO is in a Strong Downtrend, including a recent Death Cross (SMA 50/200).  It is still about 40% from the nearest Support level (~ $0.04).  However, 1) it appears oversold with Oscillator indicators, 2) MACD just signaled Buy, and 3) there is a bullish RSI Divergence, all of which could possibly point to a short-term bounce, if not a full fledge reversal.  RSI Divergence means that while the price declined 26% from Oct 20 to Nov 9, the RSI indicator has risen. 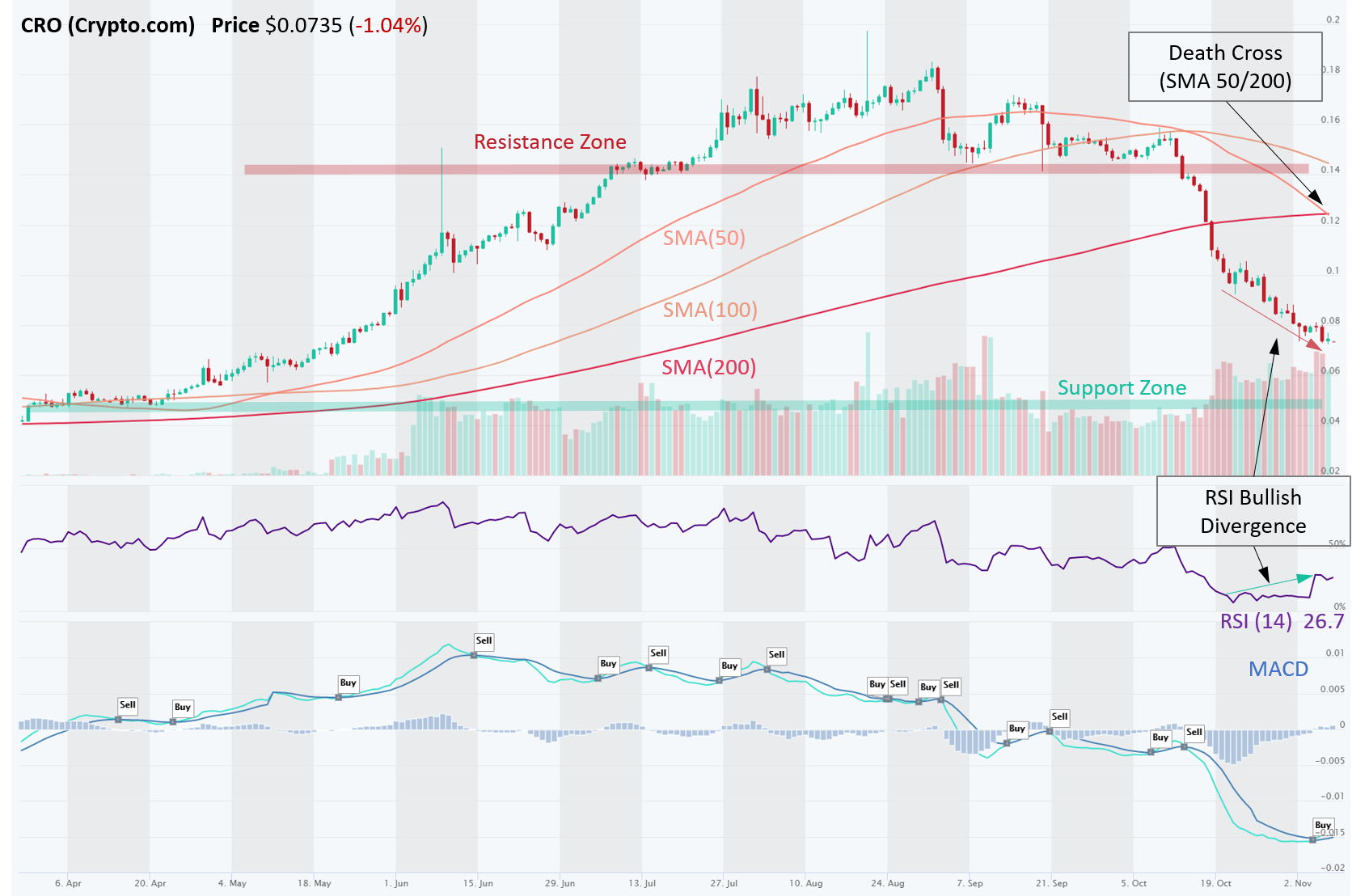 XLM – Settled into a Range, Waiting for Breakout

XLM is in a downtrend Medium- and Long-Term.  There was a Death Cross (SMA 50/200) in mid-October, which confirms the LT trend.  However, price has stabilized on a Short-Term basis into a sideways Range and MACD flashed a bullish signal recently.  Traders could trade the Range (Buy Support  $0.07 and Sell Resistance @ $0.085) and/or wait for a breakout either way out of the range. 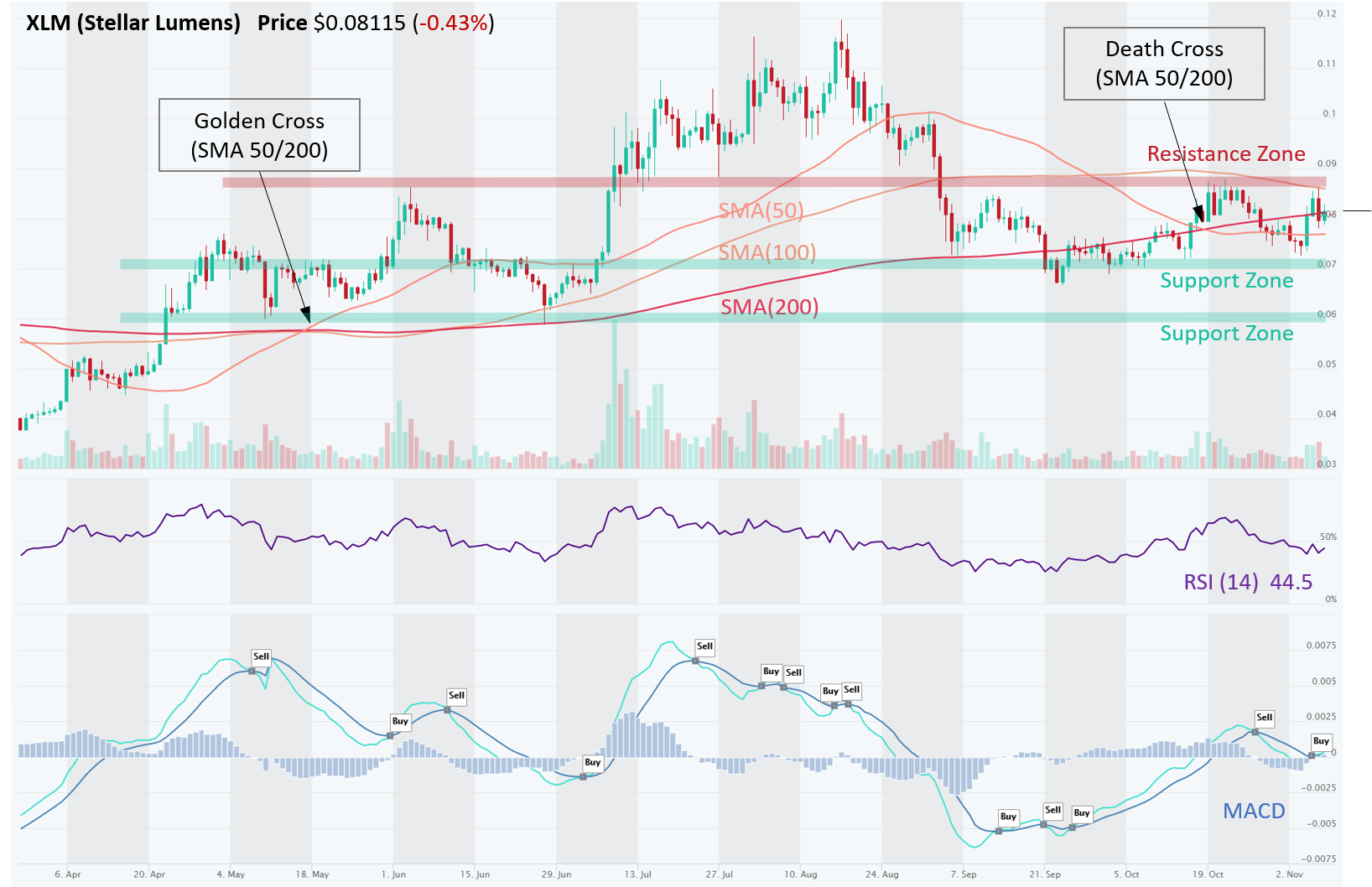 XTZ – Emerging Falling Wedge Pattern, on a Verge of a Breakout, Possibly a Reversal (Up)

XTZ is in a Downtrend across all time horizons (Short-, Medium-, Long-Term).  Price is trading in an Emerging Falling Wedge pattern, which tends to resolve in a bullish breakout.  Either way, a breakout is nearing as the price is approaching the pinnacle of the wedge formation.  Until such breakout, however, traders can trade within the pattern trendlines (Buy Support, Sell Resistance).  Recently, momentum indicators such as MACD and RSI have turned bullish. 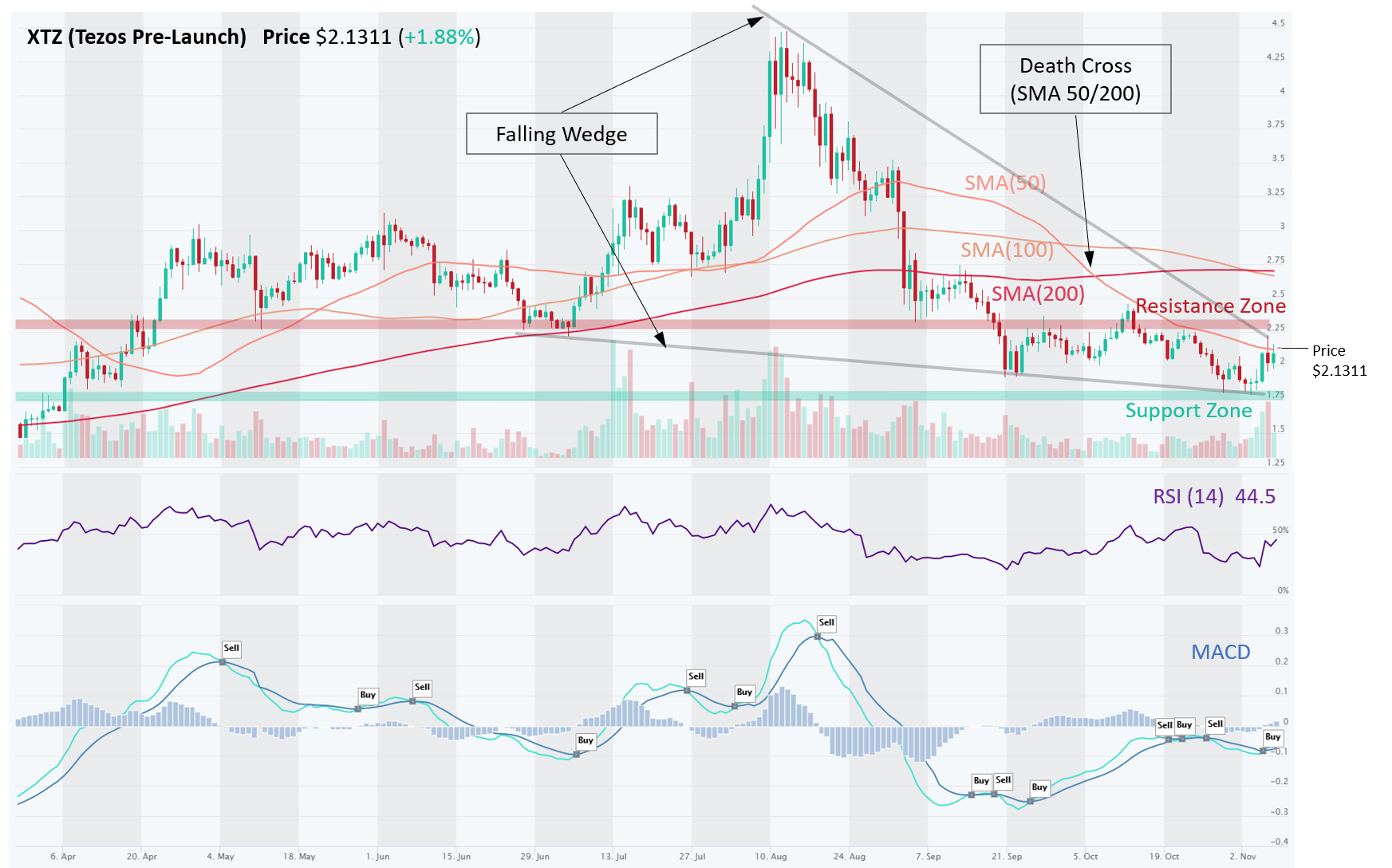 LEO is in a Strong Uptrend across all time horizons (Short-, Medium-, Long-Term).  Price is trading in an Emerging Ascending Triangle, which typically resolves in a bullish breakout.  Strong Resistance Zone exists at $1.30, while the Support Trendline is also confirmed by a 200 day SMA, which the price has respected.  Either way (Up or Down), a breakout is nearing as the price is approaching the pinnacle of the wedge formation.  MACD and RSI have recently turned bullish (momentum), but some caution is warranted: there is an RSI and OBV bearish divergence.  Meaning, while the price has made new highs, these indicators have declined.  Indeed, looking at trading volume, it is clear that Volume on Up days has been lower than Volume on Down days.  That is bearish. Hence, it is likely that price could once again get rejected at Resistance (~$1.30) or stage a false breakout and retreat back to Support Trendline.  We need to see a decisive breakout above $1.30, with big volume, to get convincing evidence that the buyers are willing to chase it above the Resistance. 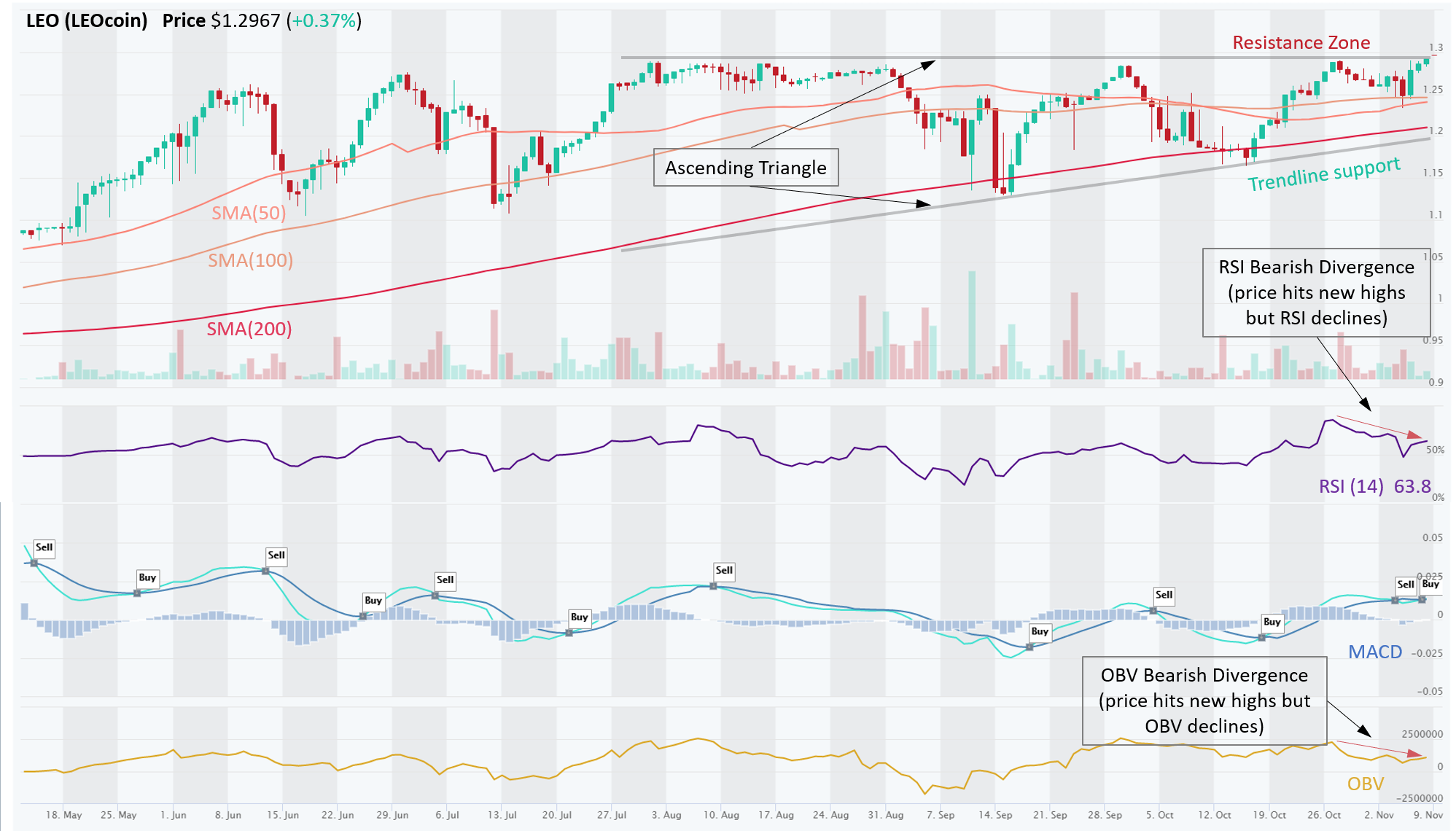