Last week, we witnessed some very bullish action on BTC. It not only broke resistance at $12K, but also charged through $13K and is making new highs this year!  With no real resistance to serve as a guide, we check the Fibonacci retracements theory, based on which, we’ve reached a 61.8% retracement from the 2017’s all-time high and this level also coincides with high from June 2019. Also, we note that RSI is quite overbought, but if this resistance is taken out, then path to $16,300 is clear!

Bitcoin’s bullish trends (TA and fundamentals) set up a positive backdrop for altcoins.

We’re highlighting price action of ANKR (Ankr), because it is trading near SMA(100) and on the trend line support of channel up. RSI at 60 still has room to run and if ANKR manages to bounce from these levels, the channel will continue upwards.

THETA (Theta Token) is quite interesting, because it has produced a fresh MACD signal and is also trading at trend line and horizontal support at $0.60. If it respects this trend line support, with fuel from MACD it may test again the triple resistance at $0.80. Also, Theta is supported by SMA(100) at $0.50 in case trend line support fails.

3. Momentum – bullish. This screen looks for coins with recent bullish momentum, regardless of trend direction.

Bitcoin Cash (BCH) has an interesting setup, because it is trading very close to both SMA(100) and SMA(200) and trend line support, which increases the probability of BCH respecting this support. Moreover, it produced a fresh MACD buy signal and with RSI still below 70 it has very decent potential for continued bullish action.  Also, it is one of the four “PayPal coins“. 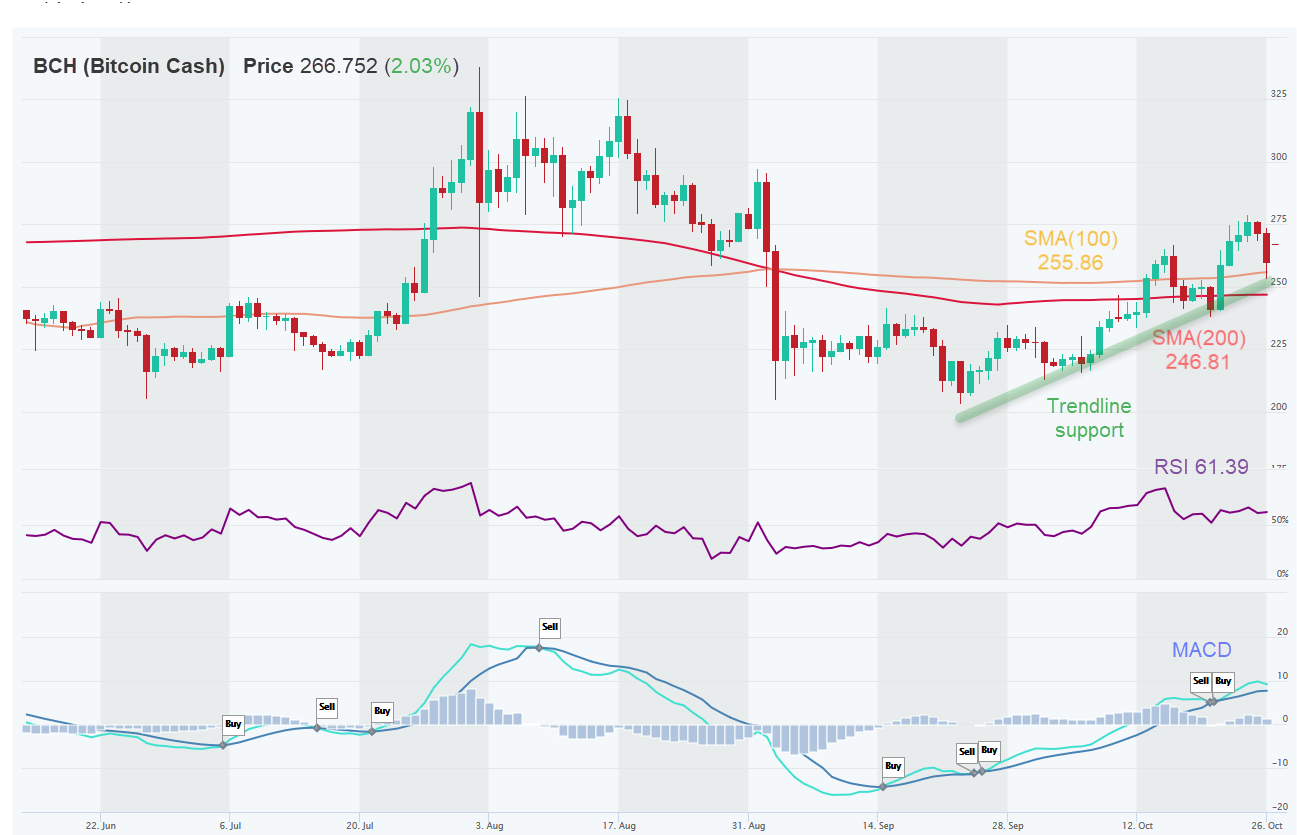 We’re highlighting XEM (NEM) again (same as last week), because it is still respecting this setup. It is still ranging between $0.125 and $0.100. Each day that SMA(100) is not broken increases the likelihood of a bounce. RSI and CCI have entered oversold territory at 19.52 (last week 35.01) and -159.6, respectively, which can also indicate seller exhaustion. 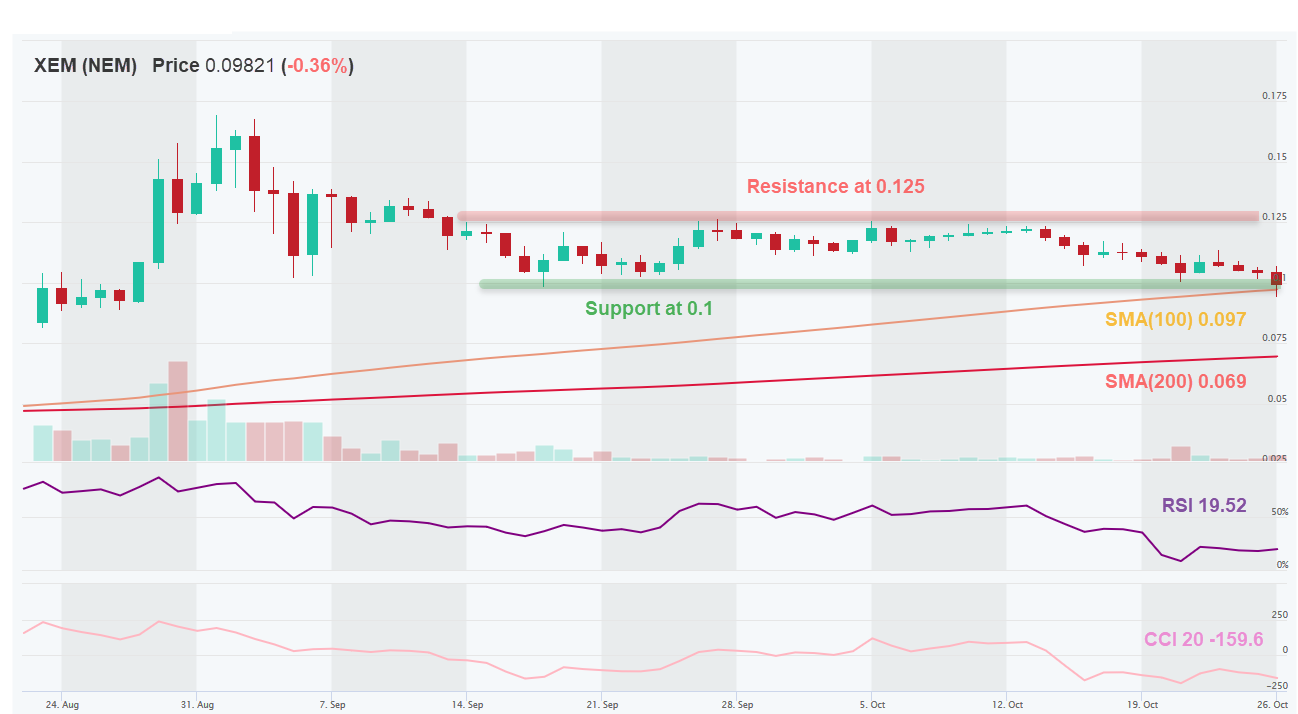 IRIS (IRISnet) is very oversold on RSI, STOCH and CCI 20, and it has recently produced bullish divergence on STOCH (price fell from $0.05405 to $0.0538, while STOCH increased from 1.00 to 14.76). This may indicate potential seller exhaustion. It is also trading near support zone at $0.050.  Also, note that it has respected the SMA(100) resistance fairly well. 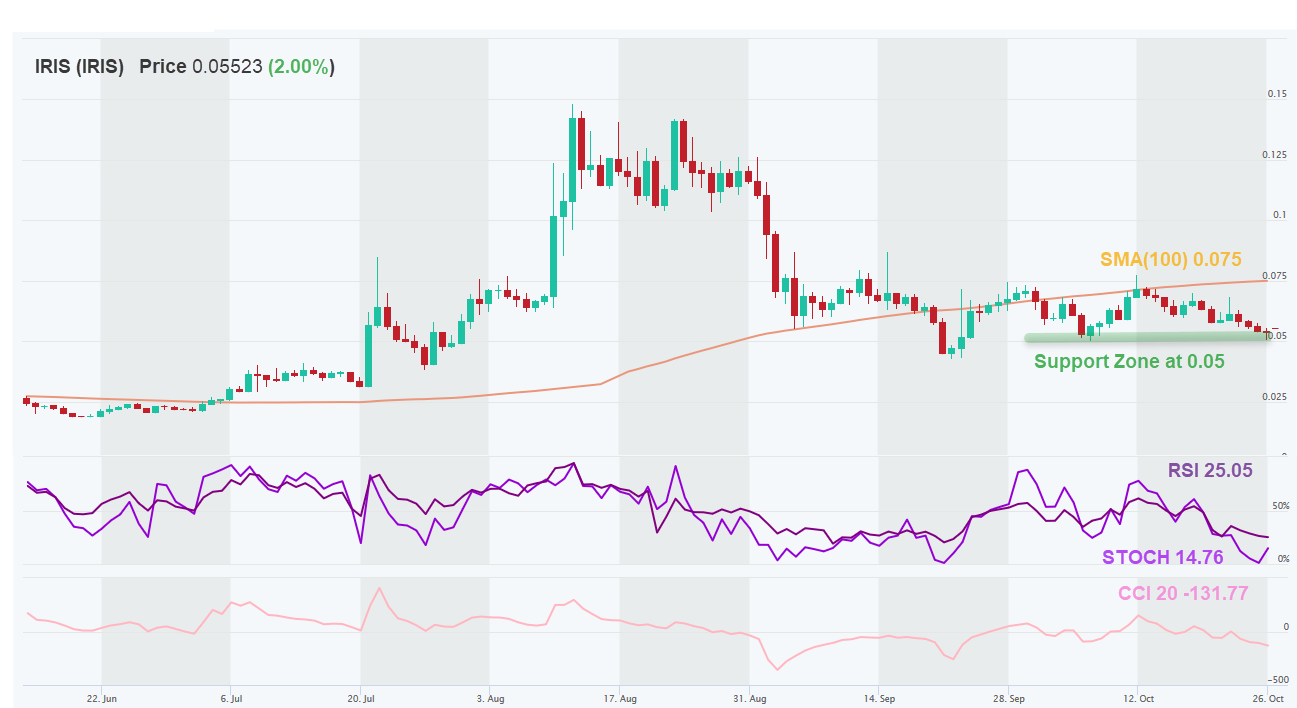