Trade setup: Bearish breakout from Sideways Channel ($50-65) reaffirms downtrend and could send the price down to $40 support area next. That was the low point from June. (set a price alert). 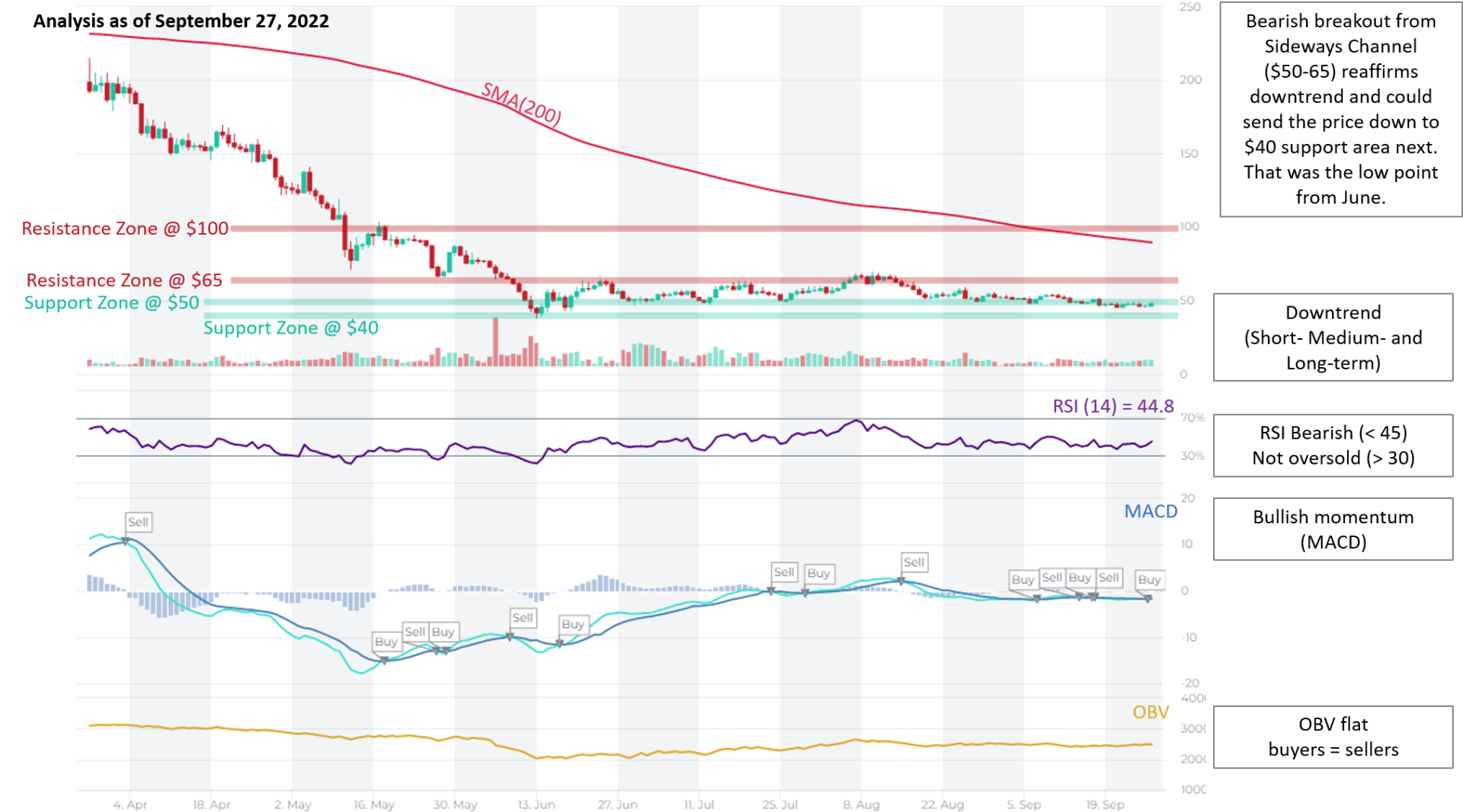 What is Elrond (EGLD)?

Elrond is a blockchain designed for high throughput and relatively fast execution speed compared to other smart contract platforms. It features Adaptive State Sharding as its scaling solution and a Proof-of-Stake (PoS) variation called Secure PoS to secure the network. Elrond also contains a WebAssembly-based virtual machine that can support the creation and execution of decentralized applications (dApps).

Elrond is a new blockchain architecture, designed for high throughput and fast execution speed. To achieve this, Elrond introduces two key features: an Adaptive State Sharding mechanism, and a Secure Proof of Stake (PoS) algorithm, which aims to enable linear scalability. The team says its smart contract platform can process upwards of 15,000 transactions per second, with six-second latency and low transaction costs, yet aims to remain permissionless, borderless, and globally accessible. Elrond is built by a team of entrepreneurs, along with 13 engineers and researchers who have worked at various tech companies, such as Microsoft, Google, Intel, and NTT DATA, and have experience working with blockchain platforms. The team includes two PhDs in CS and AI, multiple math, CS, and AI Olympiad champions, and a former member of the NEM core team.

Elrond architecture rests on the following key innovations: Adaptive state sharding: transaction, data & network sharding with an adaptive mechanism for shard merges and splits that takes into consideration both the available nodes/validators but also the network usage Secure Proof of Stake (SPoS): enables a consensus on block production in two communication rounds with modified Boneh–Lynn–Shacham (“BLS”) multi-signatures among the randomly sampled validators of the consensus group Additional features include: Elrond manages malicious attacks via intra-shard and cross-shard node reshuffling. Nodes inside the shard are randomly selected in the consensus group without the possibility of knowing the members more than a round in advance. Every epoch up to 1/3 of the nodes in every shard is reshuffled to other shards in order to prevent collusion. Secure randomness beacon with BLS signing makes the randomness source unpredictable Elrond balances smart contracts in shards, enabling it to run multiple SCs in parallel, while the cross-shard calls are handled through an asynchronous cross-shard execution model Fast finality for cross-shard transactions. Elrond attempts to accomplish this through the dispatching algorithm (when the decision is made) and the routing protocol (where should the transaction be executed).

EGLD will allow network participants to conduct any network action, such as submitting transactions, running smart contracts, providing services like staking, or running a node. The Elrond team designed the token to act as a medium of exchange for services built on the platform. They can also stake EGLD on the network to run a node in exchange for inflation rewards.