Trade setup: After reaching $3.00 level, price encountered selling pressure and got rejected, pulling back below $2 key level. So far, attempts to break back above $2 have failed and trends remain bearish. Wait for price to 1) break back above $2.00 to resume uptrend, or 2) pull back near $1.00 support for a swing entry. (set a price alert). Previously, price rallied in July/August driven by META / Instagram partnership news. 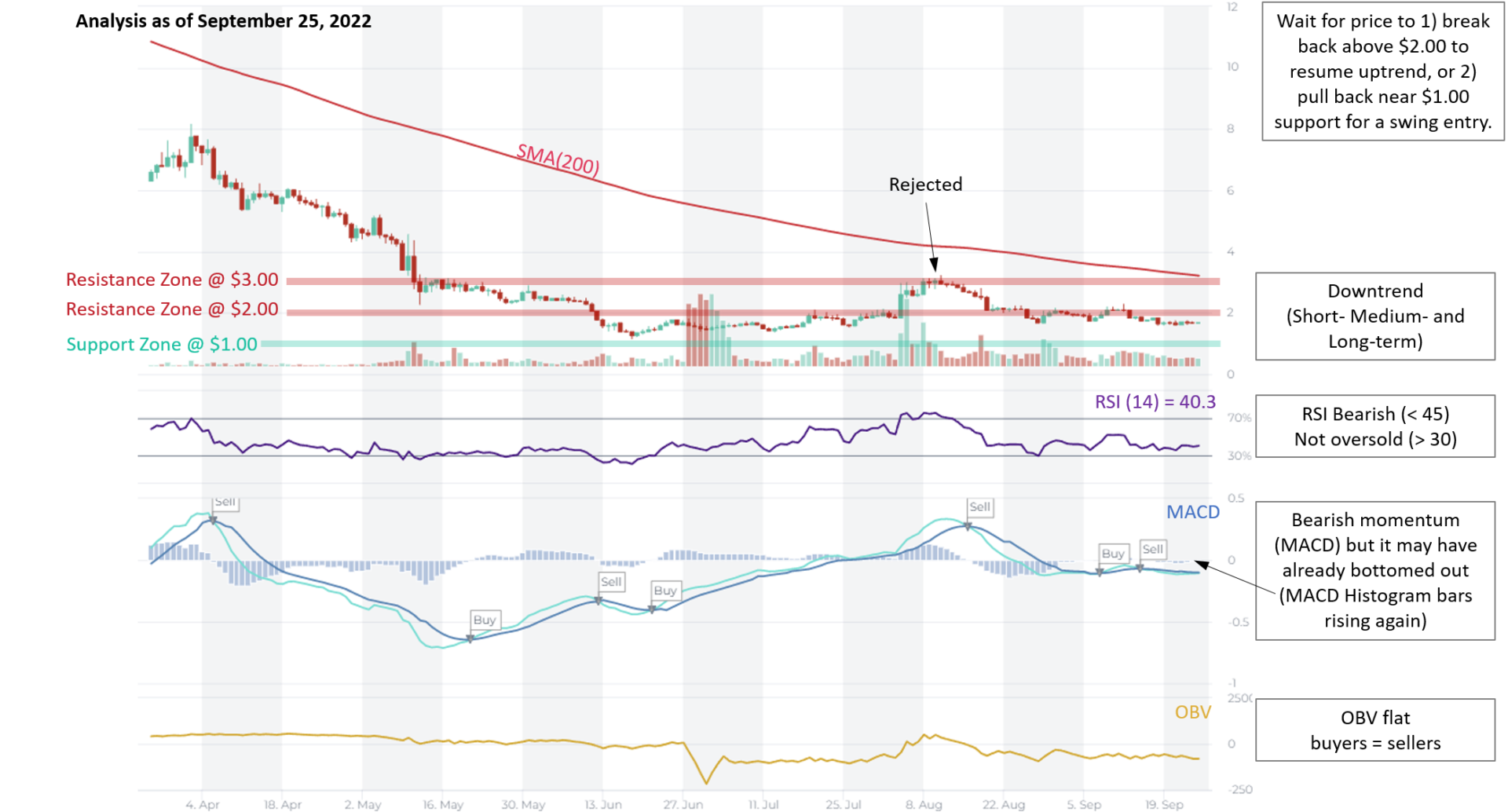 What is Flow? The Blockchain Built for NFTs

What is Dapper Labs (FLOW)?

Flow is a blockchain created by Dapper Labs that aims to make it easy for developers to build decentralized applications and businesses. Flow uses a multi-role architecture design to scale the network instead of sharding. One of the fundamental reasons Dapper Labs opted to shift away from Ethereum and build its own general-purpose blockchain was to avoid the complexity of sharding. Flow asserts that its scaling-without-sharding strategy will improve network speed and throughput while preserving composability standards and a developer-friendly, ACID-compliant environment.

Dapper Labs was founded in 2018 and is based in Vancouver, BC. As of Fall 2019, the team at Dapper Labs has been building the production version of the Flow network. This includes complete implementations of protocol logic for each of the various node types, integration of the Hot Stuff consensus algorithm, and implementation of the various crypto libraries and signatures the protocol requires. The team released the Flow Beta Mainnet in May which supports production user experiences for us and its partners.

For Beta Mainnet the native token (FLOW) existed on the network to instantiate user accounts and provide a minimal balance for user to conduct their first transactions. All fees were a small nominal amount at this stage. Future development will include integration of epochs (the ability for new nodes to join and leave the protocol), full challenge arbitration by the consensus nodes, performance improvements to the protocol, and upgrades to the programming language (Cadence).

Short Term The Flow blockchain will have an initial bootstrapping phase to create the initial circulating supply for the network through staking rewards paid to anyone willing to lock their FLOW token and participate in the network. During the bootstrapping phase, at least 20M FLOW tokens will be distributed, representing approximately 1.6% monetary inflation. Staking rewards begin accruing after November 2, 2020 and are paid out every epoch (approximately weekly).

Long Term New issuance on Flow is used for staking rewards in cases when transaction fees are not sufficient to compensate delegators and validator node operators. On or before December 15, 2020, the total new issuance rate across the network is capped at 5% per year. This cap will go down to 3% after June 1, 2022. New issuance “tops up” the transaction fees to a minimum guaranteed income for node operators. If fees cover the income guarantees, new issuance goes to 0. Therefore, as the Flow blockchain gains adoption and fees increase, the issuance should eventually remain at zero while fees make up a majority of network rewards.” Note: There is an additional 250 million FLOW tokens, half of which will be held in the foundation reserve for staking and delegation only while the other half is intended as collateral subsidies to secondary protocols. As a result of the intended lockup, these tokens are not reflected in the circulating supply.

The FLOW token is the blockchain native token required for staking on the platform, as well as the currency in which staking rewards are paid. In addition, small amounts of FLOW token are required to pay transaction fees and a minimum reserved balance is required to pay for storage on the network. Flow is a proof-of-stake system, so operations of the validator nodes require FLOW tokens. The tokens will have multiple uses, including: Staking Staking rewards Gas/Transaction fees Account storage deposits Collateral for stablecoin and other third party defi products Participation in future protocol governance and ecosystem development.

There are four pillars at the foundation of the Flow blockchain: Multi-role architecture Resource-oriented programming Developer ergonomics Consumer onboarding Multi-role architecture Flow’s design is unique, allowing the network to scale to serve billions of users without sharding or reducing the decentralization of consensus. Flow pipelines the work of a blockchain miner or validator across four different roles that all require staking; a separation of concerns that significantly reduces redundant effort. Epochs will reflect the plans outlined in this document – Incentives in a Multi-Role Blockchain while challenge arbitration will in Flow is described in this technical paper – Execution Verification. Resource-oriented programming Smart contracts on Flow are written in Cadence, a new programming language for cryptoassets and apps that builds on the concepts of resource-oriented programming which prioritizes ease of use for developers. Using Cadence, developers will be able to create unique and durable digital artifacts where ownership is tracked by the language itself. Flow envisions that this design will enable a powerful new category of applications.

Developers can try Cadence on the Flow Playground. Developer ergonomics Flow includes a number of features informed by Dapper Labs’ experience building some of the most used dapps of all time, including CryptoKitties. For example, Flow enables upgradeable smart contracts to allow developers to deploy smart contracts to the mainnet in a “beta state”, where the code can be incrementally updated by the original authors. Users will be alerted to the unfinished nature of this code, and can choose to wait until the code is finalized before interacting with it.

Once authors are confident that their code is safe, they can irrevocably release their control on the contract, and then remains immutable on the Flow blockchain for all time. This balances the best-practices of product development (early iteration and refinement) with the smart contract benefits of trustless, immortal code. Consumer onboarding The native account model on Flow is designed to provide a series of benefits to improve the experience for all users, from rank beginners to seasoned experts. For example, there are hooks built into the protocol to allow account recovery flows for users who lose their keys and optional multi-sig support with the ability to frequently cycle keys for advanced use cases. General Tech stack overview The entirety of the node software is currently written in the Go programming language.

This includes basic storage (BadgerDB), networking (libp2p), consensus algorithm (self implemented HotStuff), execution storage (self implemented binary Merkle tree), execution environment (Cadence) and all supporting components. The codebase is generally split into sections related to each of the roles: Access, Collection, Consensus, Execution and Verification, with the exception being shared components, such as caching, networking and cryptography. The Flow blockchain programming language, Cadence lives in a separate repo and is maintained separately.