Pattern: Price was trading in a Sideways Channel , which is a neutral pattern (indication of market indecision). Trend Traders ought to wait for a breakout in either direction, although typically it breaks in the direction of the existing trend. Swing Traders can trade the range – Buy near Support and Sell near Resistance.

Momentum is Mixed as MACD Line is below MACD Signal Line (Bearish) but RSI > 55 (Bullish).

Support and Resistance: Nearest Support Zone is $125 (previous resistance), then $100. The nearest Resistance Zone is $150. 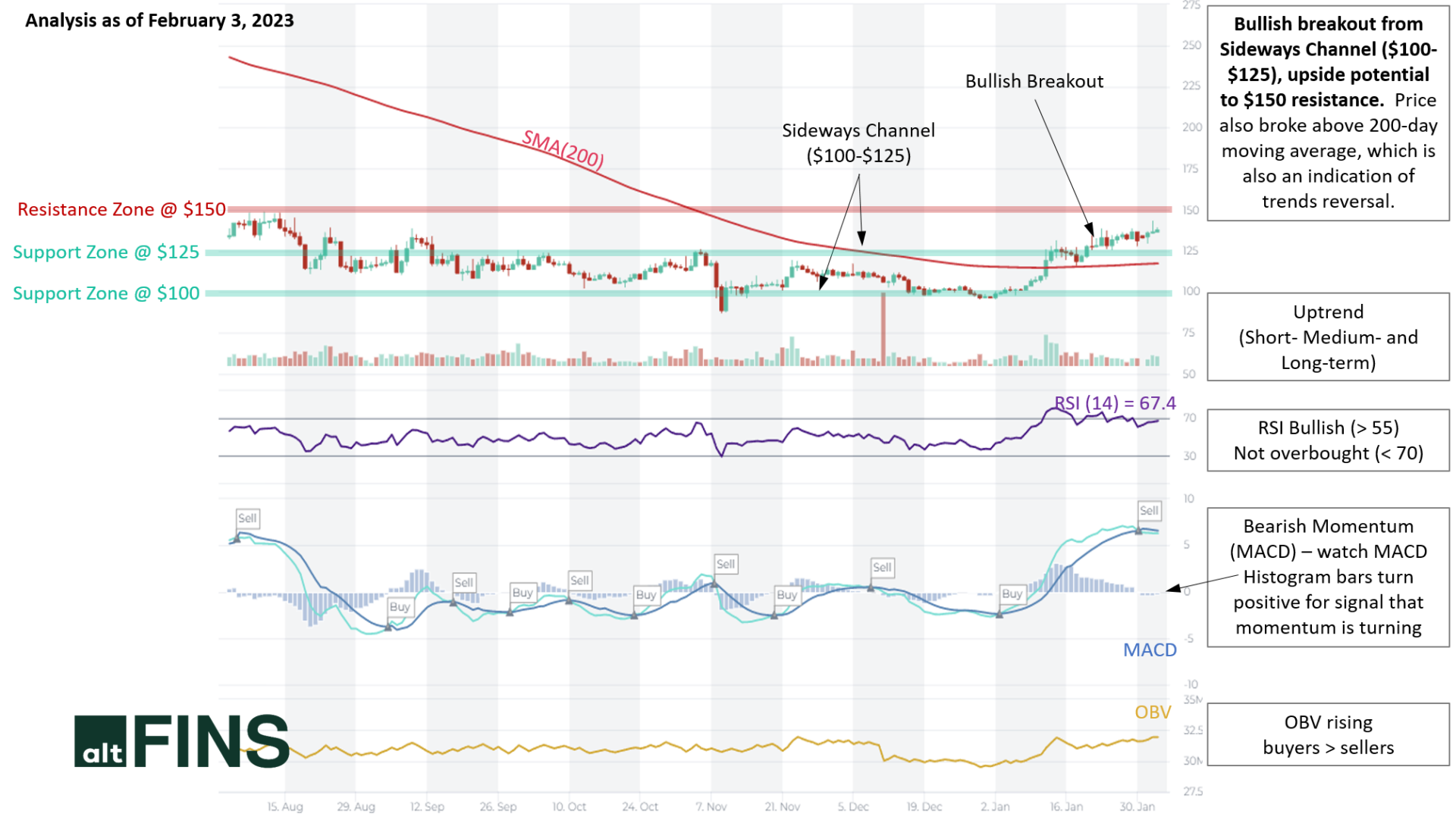 What is Bitcoin Cash (BCH)?

Bitcoin Cash, the protocol, is a distributed, time-stamped ledger of unspent transaction output (UTXO) transfers stored in an append-only chain of 32MB data blocks. A network of mining and economic nodes maintains this blockchain by validating, propagating, and competing to include pending transactions (mempool) in new blocks. Economic nodes (aka “full nodes”) receive transactions from other network participants, validate them against network consensus rules and double-spend vectors, and propagate the transactions to other full nodes that also validate and propagate. Valid transactions are sent to the network’s mempool waiting for mining nodes to confirm them via inclusion in the next block. Mining nodes work to empty the mempool usually in a highest-to-lowest fee order by picking transactions to include in the next block and racing against each other to generate a hash less than the target number set by Bitcoin Cash’s difficulty adjustment algorithm. Bitcoin Cash uses a Proof-of-Work (PoW) consensus mechanism to establish the chain of blocks with the most accumulated “work” (a.k.a., energy spent on solved hashes) as the valid chain.

Bitcoin Cash shares Bitcoin’s genesis block and entire blockchain history up to August 01, 2019 (block 478559) when the hard fork occurred. As such, it went through two halvings to date; in November 2012, and again in July 2016, each cutting the initial block reward by half. On average, Bitcoin Cash generates new blocks every 10 minutes, rewarding miners with 12.5 new BCH and the total transaction fees from the preceding block. Each block has a 32MB limit and block rewards are halved every 210,000 blocks (approximately 4 years). Eventually, once the 21 million BCH hard cap has been reached, block rewards will transition entirely to transaction fees shifting the security model of the protocol to one based on demand for block space versus one based on demand for BCH. Bitcoin Cash’s next halving is expected to happen in May 2020. The difference between BCH and BTC supply curves since the fork can be explained by the difficulty adjustment algorithm which included one addition compared to Bitcoin: the Emergency Difficulty Adjustment (EDA). This mechanism was set by the Bitcoin Cash developers to incentivize miners to prioritize BCH’s transactions over that of BTC’s. Miners leveraged this mechanism to maximize their profit by reducing their BCH mining output while waiting for the Emergency Difficulty Adjustment to reduce BCH’s difﬁculty, which in turn would lead to higher returns. As a result, 120,000 more BCH than BTC were mined from August 01, 2017, until November 13, 2017, when Bitcoin Cash underwent a hard fork to change the difficulty adjustment algorithm.

Consensus Bitcoin Cash uses Nakamoto Consensus whereby the valid chain is the longest chain with the most accumulated proof-of-work. Consensus in Bitcoin Cash, and other systems using Nakamoto Conensus, is probabilistic because there is always a chance that a new, longer competing chain could emerge with more accumulated proof-of-work, that would invalidate the current chain. Mining Miners solve computational puzzles to generate new blocks using a SHA-256 algorithm. In this process, miners compete to generate a hash less than the target number set by Bitcoin Cash’s difficulty adjustment algorithm. Notably, the target difficulty level is adjusted every block as opposed to Bitcoin’s every 2016 blocks. Although open to anyone with a CPU, Bitcoin Cash mining is now dominated by ASICs usually situated in enterprise-scale data centers. Furthermore, in order to smooth individual miner revenue as mining has become more competitive, mining is now done in pools where participants contribute hash power to the pool and receive a proportional share of the profits if the pool finds a valid block.