Recently it broke upwards from a symmetrical triangle and had very decent gains. Now it’s consolidating. Resistance is around $12,000 and there’s potential to take out this year’s high ($12,500). RSI above 70 signals that it’s a bit overbought and we may continue to  consolidate, but remember that RSI can stay overbought/oversold for an extended period. 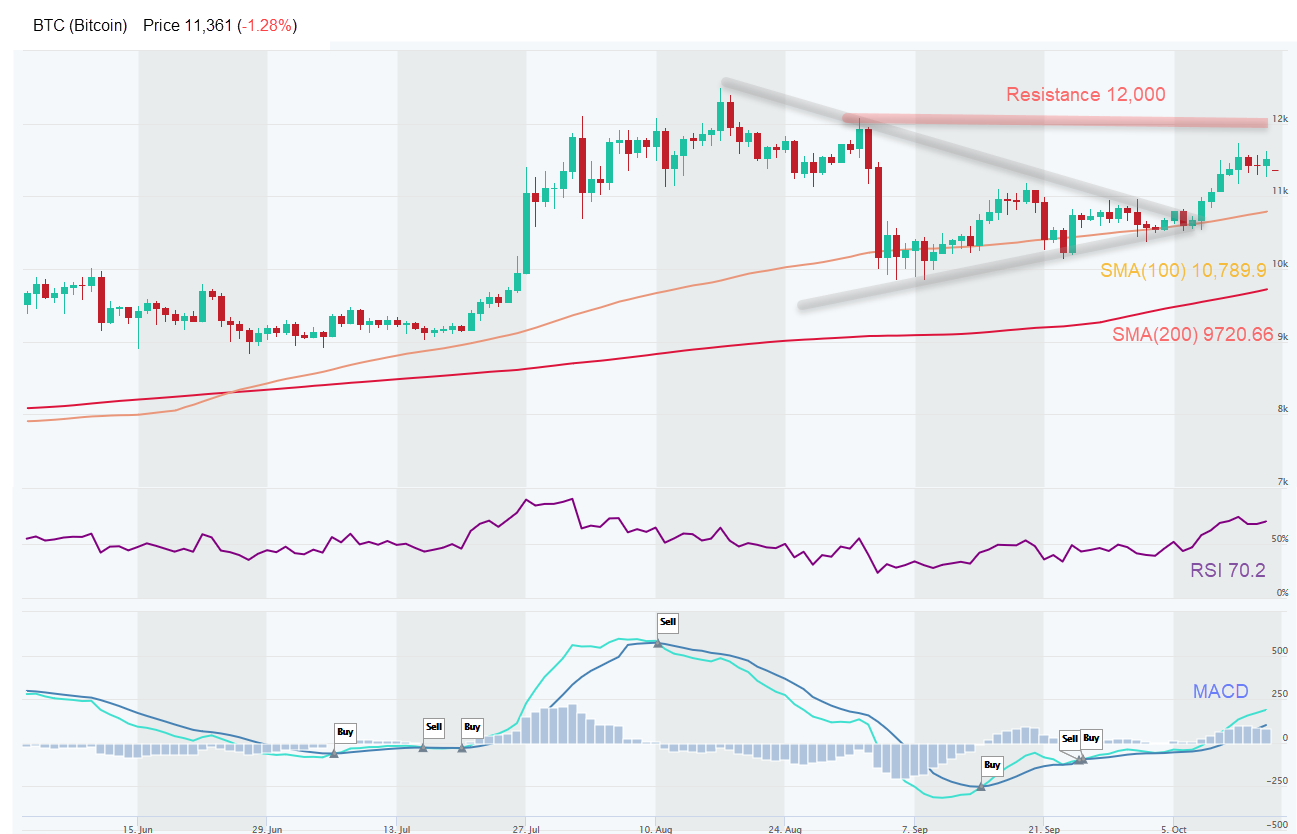 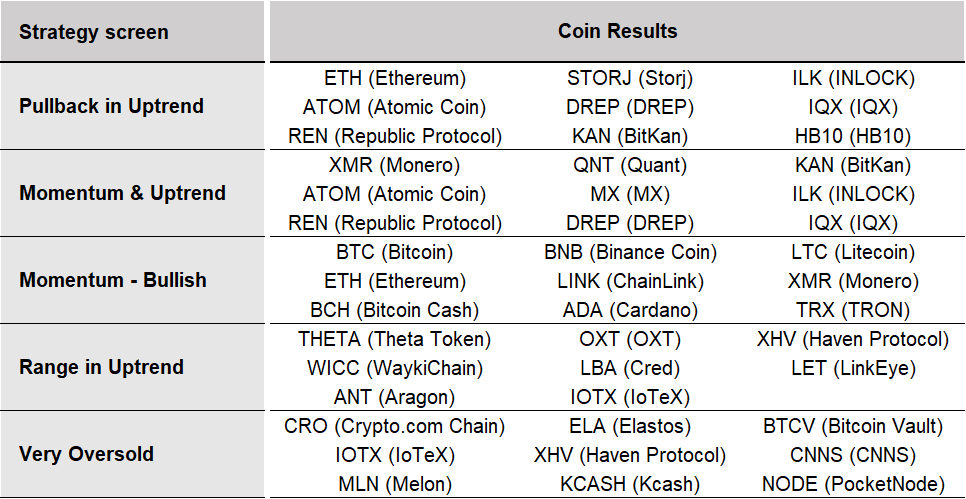 ETH (Ethereum) has had decent momentum in an emerging uptrend, and recently it’s pullled back, which may give trend followers an opportunity.  Moreover, it’s now at its 100 day SMA, which the price has respected on three recent occasions as Support (see red circles). 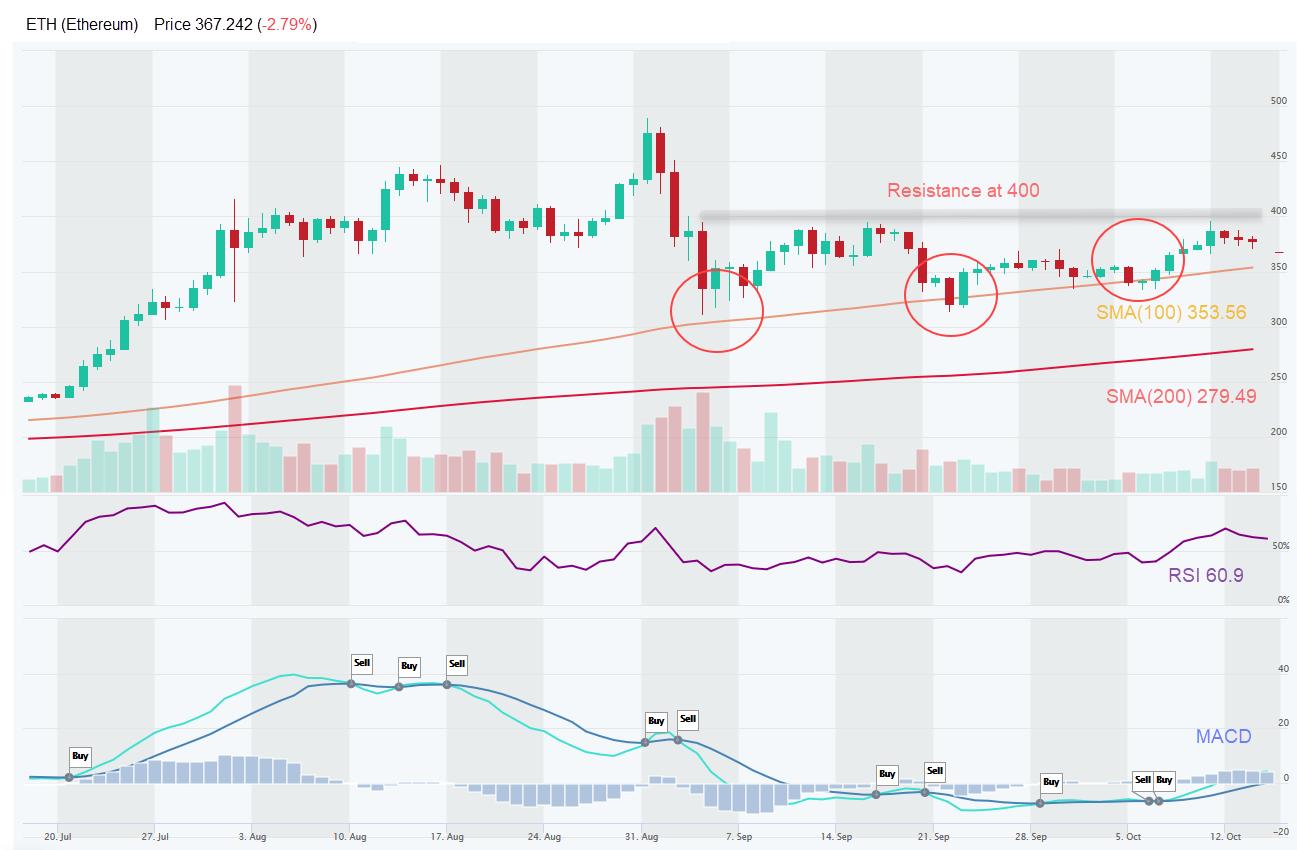 2. Momentum & Uptrend. This screen looks for coins in a long-term uptrend and a recent bullish momentum upswing.
Recently, DREP (DREP) has had a steady series of higher highs and higher lows, a text book uptrend.  And momentum again picked up (MACD and RSI crossoves). Today’s pullback could give trend followers an opportunity to join in.

Notice that it’s also trading in an Up Channel, which swing traders could have fun with – buy at the Support Trendline and sell at Resistance Trendline.

Buyers beware, however, that if price breaks through the channel’s support trendline, it could indicate a reversal or at least a change in the slope of the current trend.  More on chart patterns here. 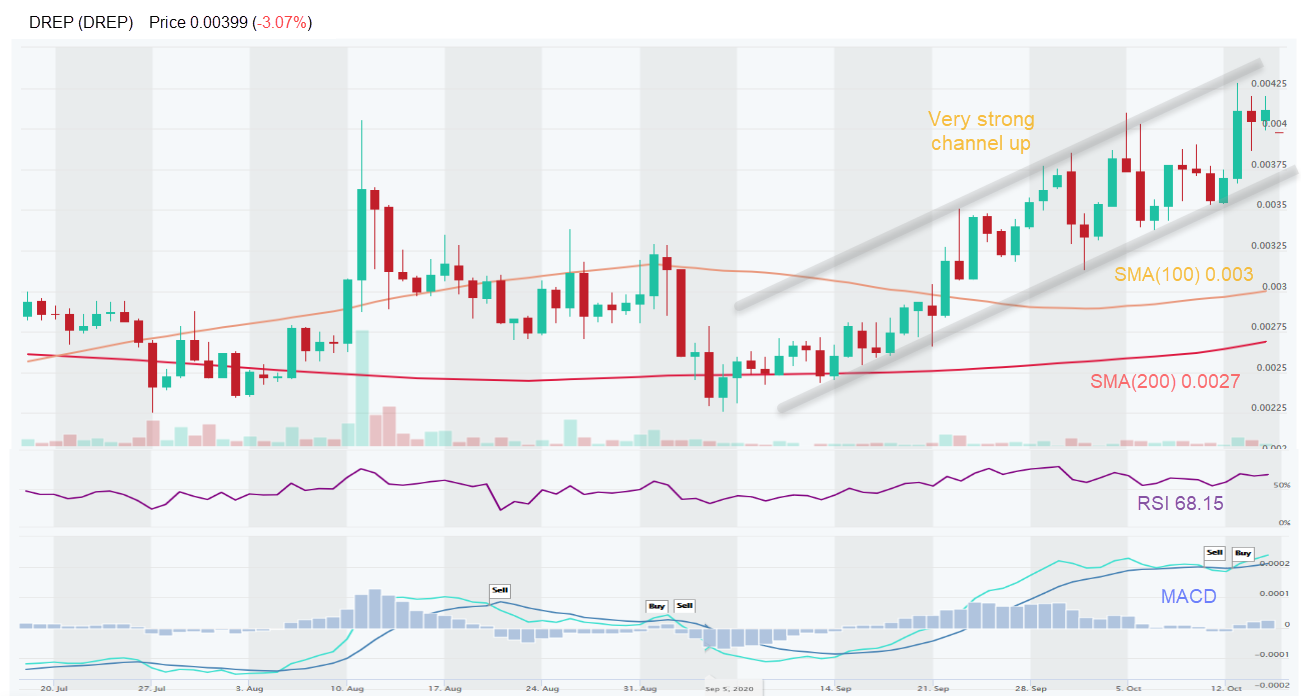 In this strategy, we highlight the price action of TRX (Tron). It appears to be trading in a $0.025 to $0.030 horizontal channel for a month now, but recently MACD and RSI produced a buy signal. Coincidentally, it’s also sitting at its SMA 100, which could act as decent Support at $0.025 level. 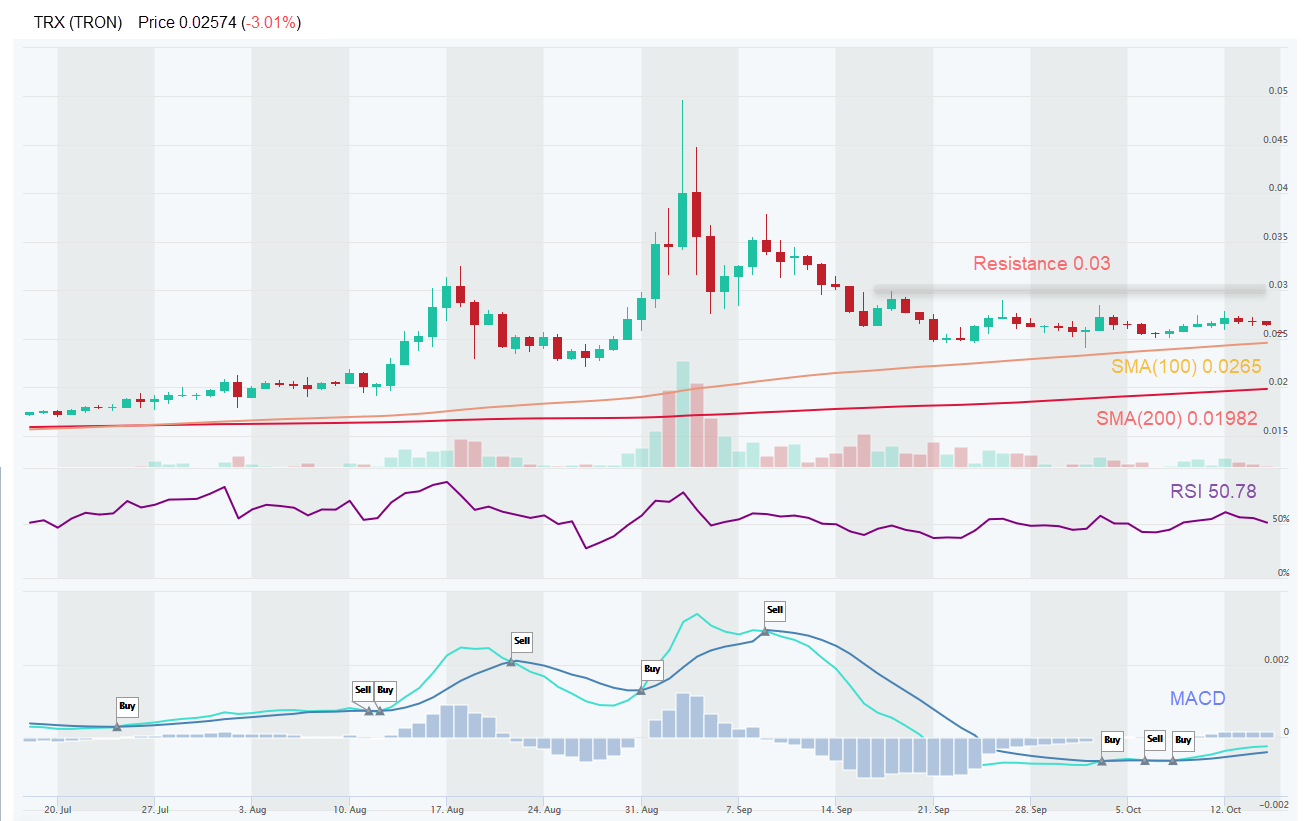 OXT (Orchid) is in a long-term uptrend, but it’s been trading in a range of $0.23 to $0.29 lately.  It is now close to its Support and the 200 day SMA, which could be an opportunity for swing traders to go long for another swing higher to the upper channel boundary (resistance zone) around $0.29.  It’s also modestly oversold with RSI at 36.4 and CCI at -109, which means it’s due for a bounce. 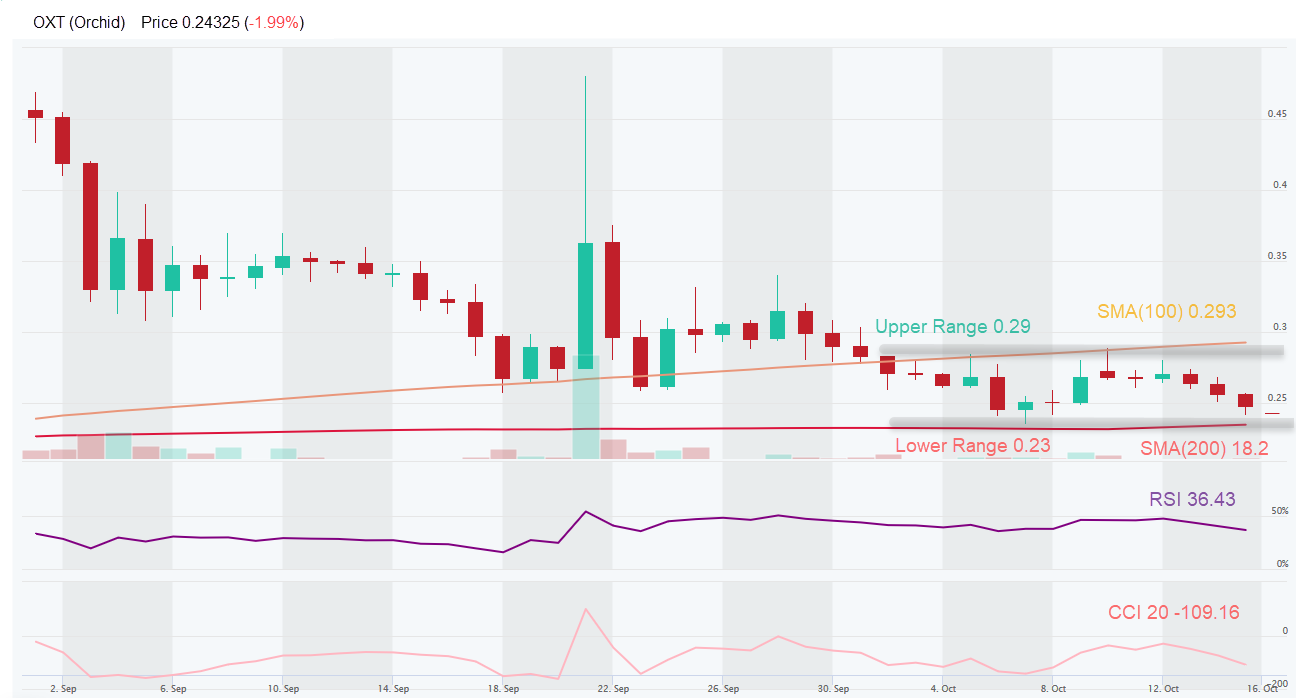 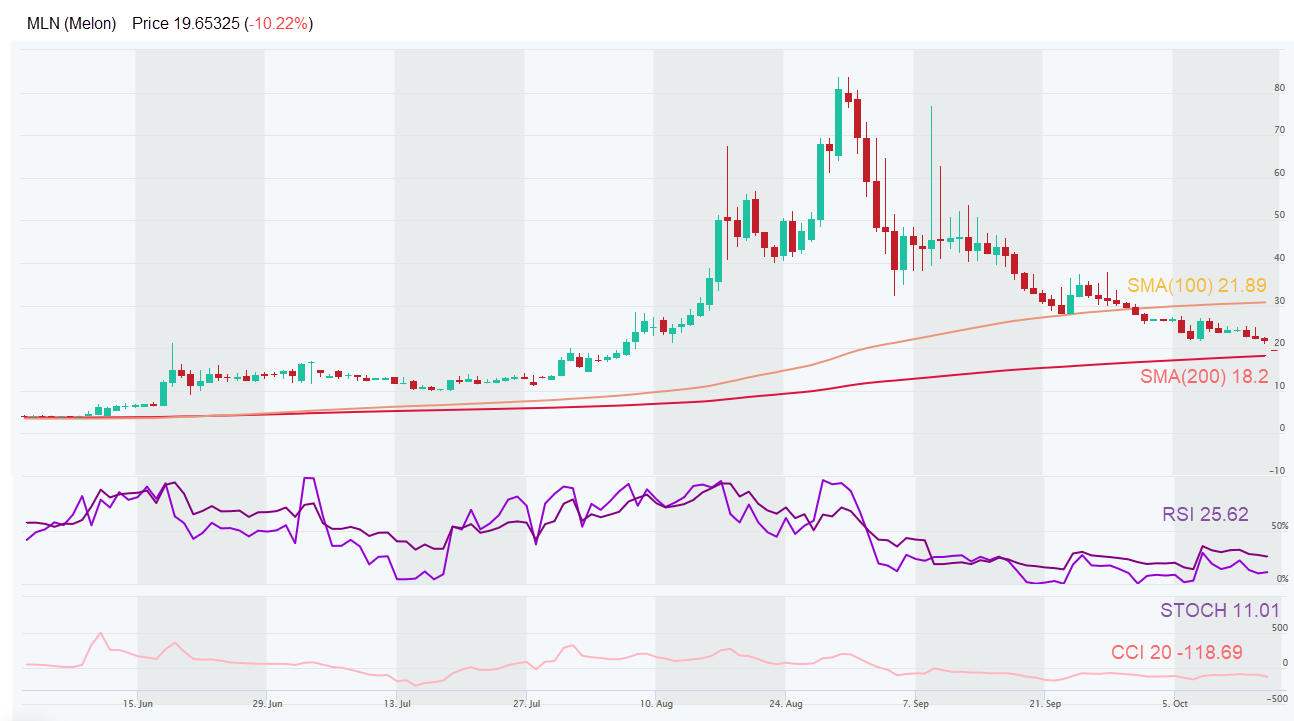 Previous PostWeek in review; more losers than gainers (ABB...
Next PostBitcoin Still in Accumulation Phase of This C...