Trade setup: Following a failed breakout from Ascending Triangle, price pulled back and broke below $700 support and reached $600, making a new Lower Low (below the prior low from June). That’s a clear sign of downtrend. (set a price alert). 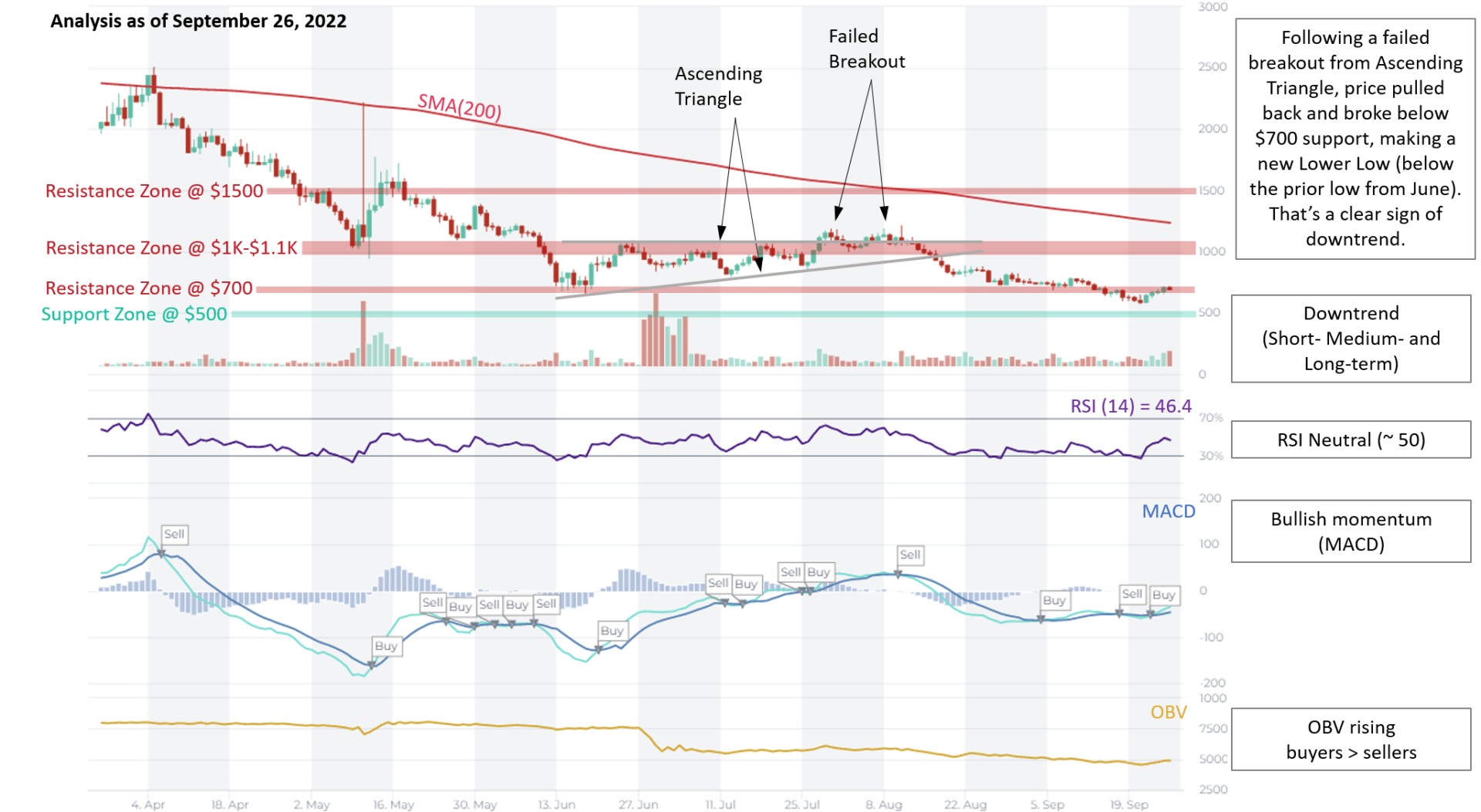 What is Maker (MKR)?

Maker is a peer-to-contract lending platform enabling over-collateralized loans by locking Ether in a smart contract and minting Dai, a stablecoin pegged to the US dollar. Dai’s stability is achieved through a dynamic system of collateralized debt positions, autonomous feedback mechanisms and incentives for external actors. Once generated, Dai can be freely sent to others, used as payments for goods and services, or held as long term savings.

The Maker protocol is an open-source project started in 2014 with the goal of creating a permissionless credit system that would allow users to take out loans collateralized by cryptocurrency. These loans are created by smart contracts that mint Dai, a stablecoin with a soft peg to the US dollar. The protocol was built by the Maker Foundation along with a number of outside parties and over time the foundation has worked to reduce its level of control. They have gradually ceded control to a decentralized autonomous organization (DAO) known as MakerDAO which governs the protocol. The DAO is comprised of individuals across the globe that own the MKR token which affords holders the right to vote on important changes. Single Collateral Dai The first iteration was known as Single Collateral Dai (SCD) because Ethereum was the only asset used as collateral to take out a loan. It launched in December 2017 and grew to support $100 million worth of debt. Despite a 94% decrease in the value of collateral over that time, the system remained healthy and Dai maintained a close peg to $1. Since Dai was the only widespread stablecoin that did not require a company to back it by holding US dollars, it became an integral piece of the growing decentralized finance ecosystem. While SCD proved to be effective, the intended goal was to transition to Multi Collateral Dai (MCD) that could accept collateral other than Dai as well as implement other key design changes. Transition to Multi Collateral Dai In November 2019 MakerDAO upgraded the protocol to MCD with Basic Attention Token (BAT) being voted as the first additional collateral available. The existing single collateral system continues to function as is while users are encouraged to migrate to the new Dai. Eventually, the single collateral system will be phased out altogether. In addition to the new collateral, MCD made other important design changes such as the introduction of the Dai Savings Rate (DSR) which allows Dai holders to earn yield and collateral auctions that create a competitive market for liquidations. Internal controversy Towards the end of 2018, the Maker Ecosystem Growth Fund (MEGF) was established to oversee the treasury of MKR tokens by nine board members chosen by the CEO Rune Christensen. According to a document from the former CTO Andy Milenius, titled ”Zandy’s Story”, after some disagreements as to how the fund was to be allocated, Rune presented two divergent choices. The “red pill” was for those who would follow his lead and focus on government compliance and integration into the existing financial system while the blue pill for those who didn’t want a formal organizational structure and would work on MCD and then cease to be funded. However, there was one group that wanted to explore alternative options that called themselves the Purple Pill. When this group was discovered it was seen as conspiratorial and five members of the board that were members of the Purple Pill group were subsequently fired. Those members then sent a legal letter stating they were wrongfully terminated.

Vaults (formerly “collateralized debt positions – CDPs) The key component of the Maker protocol and method with which Dai is created is known as a Vault. A Vault is created by depositing collateral into a smart contract which then mints an amount of Dai specified by the user. The dollar value of the collateral must be greater than 150% the value of Dai (current Collateralization Ratio). The user can transact freely with their Dai. If they want to receive their initial collateral they must pay back both the Dai they withdrew plus the interest rate on the loan (Stability Fee). If at any point, the value of the collateral drops below the collateralization ratio, then their position is subject to liquidations where anyone can come in and purchase the underlying collateral to repay the debt. Known as Keepers, these actors are motivated by the profit opportunity from buying the collateral below market price and then selling on the open market. Auctions There are three types of auctions Surplus Auctions occur when loans remain overcollateralized and payments from stability fees reach a certain amount. After that, Dai is auctioned off to Keepers for MKR which is then subsequently destroyed. Collateral Auctions occur when Vaults drop below the Collateralization Ratio. The collateral in the vault is then sold until the outstanding debt is repaid plus a liquidation penalty. At that point, the auction becomes a reverse auction, where a bidder bids on accepting smaller parts of collateral for that fixed amount of Dai. Once the process ends, the remaining collateral is returned to the vault owner. Debt Auctions occur in the worst-case scenario when the price of collateral drops precipitously such that it can no longer cover the entire debt paid. The system will first look towards the surplus from Stability Fees to cover the debt. If that is not sufficient, a reverse auction occurs to cover the fixed amount of Dai necessary to make the system whole. Bidders compete on willingness to accept decreasing amounts of MKR for the shortfall in Dai. Dai Savings Rate (DSR) The DSR was implemented in MCD as a way for Dai holders to earn interest on their holdings. Users can deposit Dai into a non-custodial smart contract and immediately begin earning interest funded by Stability Fee payments. They are also free to withdraw at any time. The DSR serves as a monetary policy tool for governance to control the outstanding supply of Dai in order to manage the $1 peg. If the peg were to drop below $1, MKR holders could vote to increase the DSR. This would incentivize Dai holders to lock more Dai up, decreasing the supply and ideally bringing the price back up.

The MakerDAO network circulates two native tokens: DAI and MKR. Dai is a currency token that seeks to maintain price stability against a specific peg, currently the U.S. dollar, to make it suitable for short-term and medium-term use as a means of exchange and store of value. Tokens with these characteristics are commonly referred to as stablecoins. The MKR token is used for governance of the platform allowing holders to vote on various parameters such as the stability fee, debt ceiling, types of collateral to be used, Dai Savings Rate and more. MKR is also used to purchase excess Dai from collateral auctions and stability fee payments in the Surplus Auction. Once the auction is ended the protocol automatically burns the MKR leading to a decreasing supply. However, if there is a shortfall of Dai resulting from loans becoming undercollateralized, a Debt Auction will occur to raise more Dai by printing MKR, thereby increasing the supply.