Trade setup: Following a breakout from Channel Down, price is trading in a Sideways Channel ($0.20-$0.50). Swing trader: Enter near $0.20 support and Exit near $0.50 resistance. However, trend is bearish (down) so traders should keep a tight loss level below $0.20 support. (set a price alert).

Pattern: Price is trading in a Sideways Channel , which is a neutral pattern (indication of market indecision). Trend Traders ought to wait for a breakout in either direction, although typically it breaks in the direction of the existing trend. Swing Traders can trade the range – Enter near Support and Exit near Resistance. 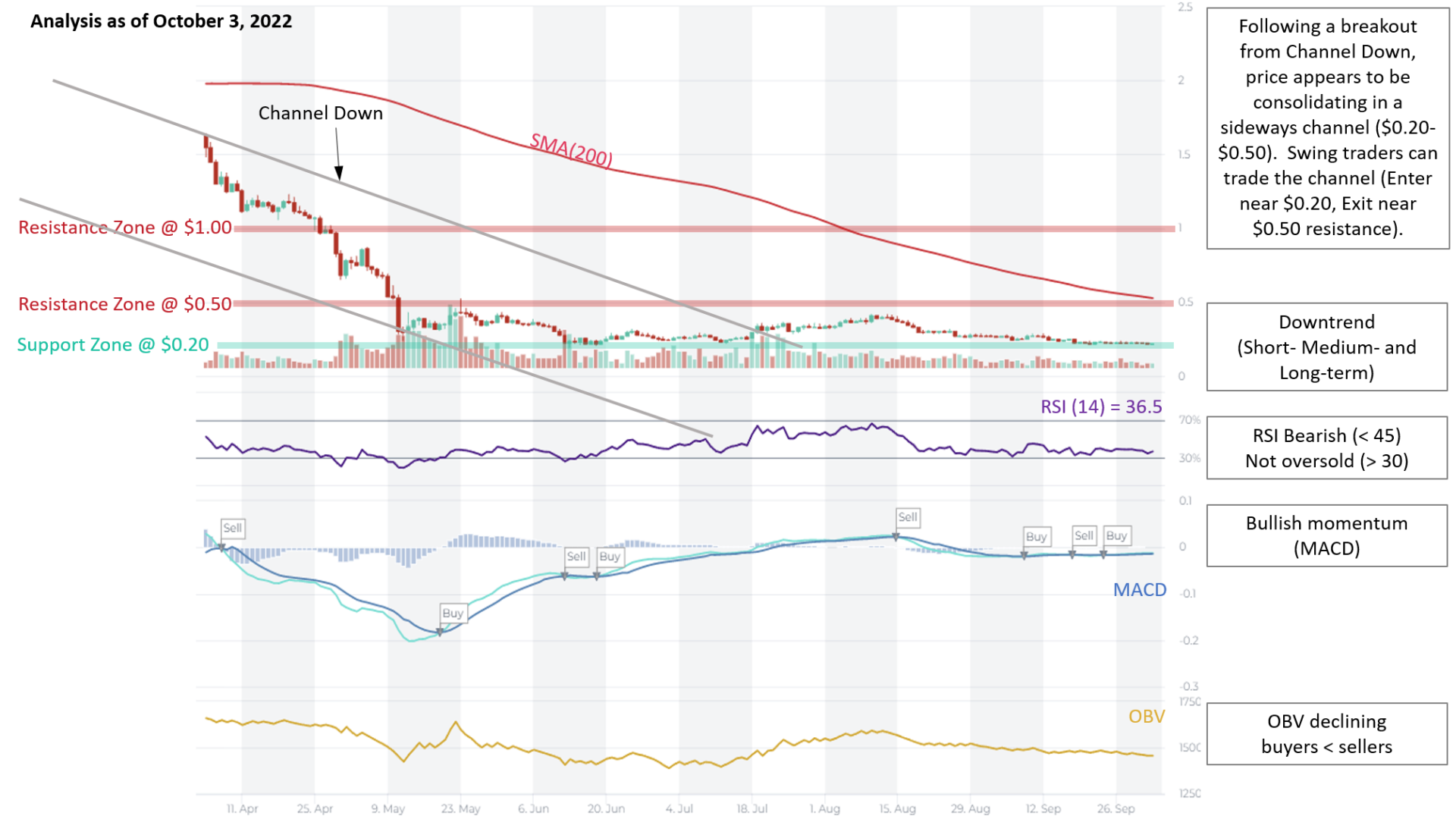 An Ethereum (ETH) to Fantom (FTM) NFT bridge is coming

Can Fantom stand in the same league as Cardano and Solana

What is Fantom (FTM)?

Fantom is a Layer-1 blockchain that uses a single consensus layer to support the creation of multiple execution chains. The network’s independent consensus layer called Lachesis, featuring a novel consensus mechanism developed by the Fantom Foundation dubbed the “Lachesis Protocol.” Lachesis can provide security to multiple other layers, the first of which is Fantom’s EVM-compatible smart contract chain called Opera. The project’s goal is to host an ecosystem of execution layers while enabling them to feature fast and cost-efficient transactions due to the benefits provided by the Lachesis Protocol.

The Fantom Foundation has built a new model for reaching a consensus on transactions called the Lachesis consensus engine (or Lachesis protocol). It uses a Directed Acyclic Graph (DAG) based algorithm to achieve asynchronous Byzantine fault tolerance (aBFT). Lachesis has four key qualities: Asynchronous: Participants have the freedom to process commands at different times Leaderless: No participant plays a “special” role in block production Byzantine Fault-Tolerant: Supports one-third of faulty nodes Near-Instant Finality: Transactions are confirmed in 1-2 seconds. Fantom has implemented Lachesis as a consensus layer that can extend to additional layers within the system. The Fantom ecosystem may eventually consist of multiple blockchain layers with Lachesis at the core. The first additional layer within Fantom was Opera, an EVM-compatible smart contract platform that launched in December 2019. Opera is a Proof-of-Stake (PoS) layer whose validator set uses Lachesis to validate transactions and produce new blocks. It now features several decentralized finance (DeFi) applications, including SushiSwap and Curve. In May 2019, Fantom announced that it would with Binance Chain to improve interoperability through the creation of a multi-asset and cross-chain ecosystem. This multi-asset initiative would introduce various new token standards to Fantom, including Fantom versions of Ethereum’s ERC-20 and Binance Chain’s BEP-2. These standards set the stage for integrating popular Ethereum applications on Opera in early 2021. The Fantom Foundation has turned its focus towards DeFi use cases with the help of Yearn Finance founder Andre Cronje, who serves as a technical advisor to Fantom. Andre has advised and helped promote Fantom’s multi-chain efforts, such as the launch of Fantom’s bridge to Ethereum.

Fantom features two core technologies Lachesis protocol: the core consensus layer Opera: an application development layer Lachesis Lachesis uses a Directed Acyclic Graph (DAG) based algorithm to achieve asynchronous Byzantine fault tolerance (aBFT). Lachesis has four key qualities: Asynchronous: Participants have the freedom to process commands at different times Leaderless: No participant plays a “special” role in block production Byzantine Fault-Tolerant: Supports one-third of faulty nodes Near-Instant Finality: Transactions are confirmed in 1-2 seconds. Fantom has implemented Lachesis as a consensus layer that can extend to additional layers within the system. Opera The Opera chain is an EVM-compatible application development layer; therefore, it can support smart contract development in Solidity. The EVM currently used by Opera is the default go-ethereum VM implementation. It doesn’t include the enhancements Fantom has previously proposed in the paper “The Economics of Smart Contracts.” Opera features a Proof-of-Stake (PoS) system and validator set that is leaderless. In other words, the validators don’t determine which blocks are valid. The Fantom Foundation believes that removing block leaders can increase network security.

Fantom’s outstanding supply is fixed. The liquid supply increase displayed on the curve is the consequence of the vesting schedules detailed in the Launch section as well as the distribution of premined staking rewards. Those rewards are set to be distributed daily to validators and delegators. The daily expected distribution is set at 682,425.46 FTM, until 2024.

FTM tokens are intended to be used to pay transaction and smart contract execution fees, secure the network through Fantom’s Proof-of-Stake (PoS) consensus, and vote within Fantom’s on-chain governance system. Network validators must stake FTM to run a node and collect a proportional percentage of staking rewards. Users that don’t run a node can delegate their tokens to an existing validator to earn a portion of staking rewards and network fees. Voting power is proportional to the amount a validator has staked plus any delegations received.