Trade setup: Bullish trend under way, price making Higher Highs and Higher Lows. Price was rejected 2x at $17 resistance. Pullback near $12.50-14.00 support could be a swing entry point, with upside potential back to $17 resistance zone. (set a price alert).

Trend: Uptrend on Medium-Term basis and Neutral on Short- and Long-Term basis.

Momentum is Mixed as MACD Line is below MACD Signal Line (Bearish) but RSI ~ 50 (Neutral). 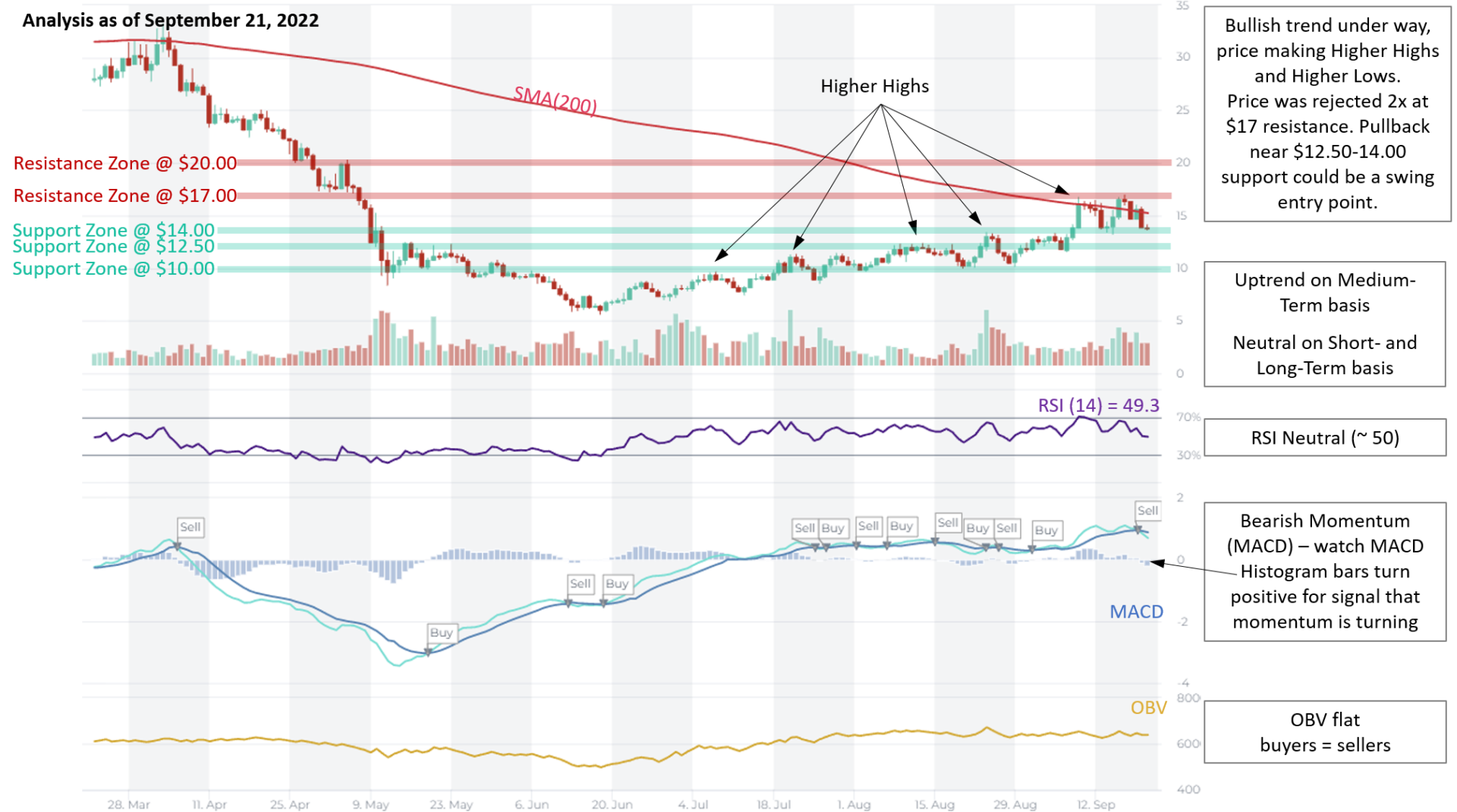 Why Is ATOM on the Rise?

What is Comos (ATOM)?

Cosmos is a network of sovereign blockchains that communicate via IBC (Inter-Blockchain Communication), an interoperability protocol modeled after TCP/IP for secure transfer of data and value. The Cosmos Hub, also known as “Gaia,” is a Proof-of-Stake (PoS) chain with a native token, ATOM, that acts as the primary hub for routing transactions and data between blockchains within the Cosmos network. The Cosmos Hub, like the majority of blockchains in the Cosmos network, is secured by a Byzantine Fault-Tolerant (BFT) Proof-of-Stake consensus algorithm called Tendermint.

Cosmos aims to combine the utility of open-source software, decentralized value-transfer networks, and time-stamped blockchain data storage to accelerate the scaling, adoption, and use-case experimentation of these protocols. It views some key obstacles to these goals as status quo inefficiency, limited performance, and ad hoc governance styles. To correct these concerns, Cosmos was created as a decentralized network of independent, scalable, and interoperable blockchains, creating the foundation for a new token economy. The ideal solution, according to Cosmos, is to build a tool for interacting with multiple parallel blockchains such that the relative, unique value of a given chain’s features are exploitable on any other chain. In essence, a layered network connecting existing chains and sync activity and growth in the blockchain space. The Cosmos SDK is a developer-friendly, modular framework, each powered by a Byzantine Fault-Tolerant (BFT) consensus algorithm such as Tendermint Core, allowing developers to fully customize their decentralized applications and focus on business logic.

Cosmos is designed to operate as a network of “zones” and “hubs”. Zone simply references a network of many independent blockchains connected under Cosmos. Their interaction is powered by Tendermint Core, a secure consensus protocol easily adaptable with Proof-of-Stake (PoS) blockchains. The first Cosmos zone is called a hub, a Proof-of-Stake environment for multiple cryptocurrency assets. The hub is also able to interface with other subsequent zones via Cosmos’ inter-blockchain communication (IBC) protocol.

Staking, governance, and voting. Proportional claim on aggregate transation fees (can be paid in native tokens or stablecoins from connected chains).