Trade setup: Previously, price broke out from Falling Wedge, and reached $100 resistance area where it got rejected. Pullback near $50 support area could be a swing entry. That’s where price found support in June. (set a price alert). 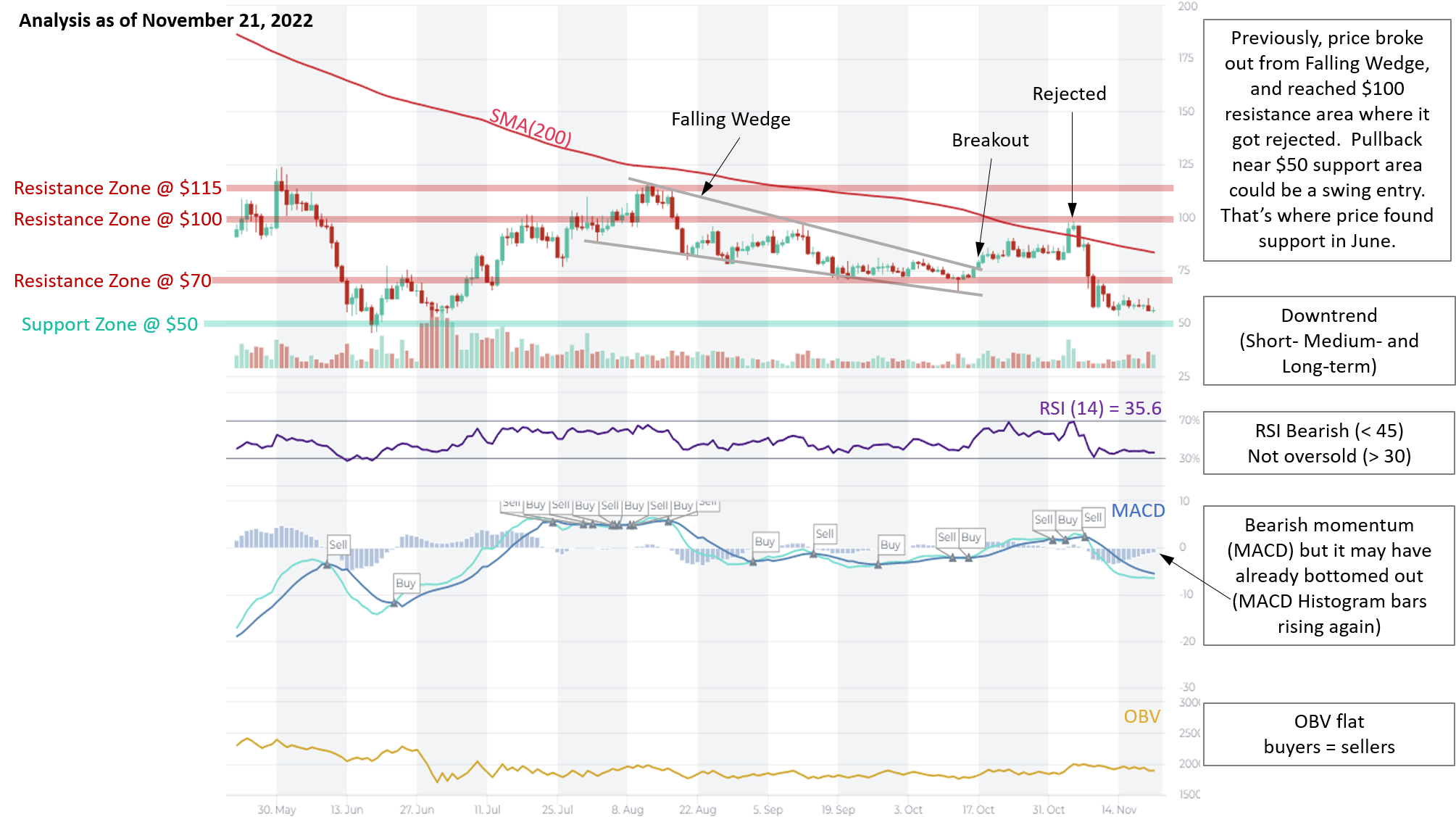 What is AAVE (AAVE)?

Aave is an open-source and non-custodial protocol to earn interest on deposits and borrow assets with a variable or stable interest rate. It also enables ultra-short duration, uncollateralized flash loans designed to be integrated into other products and services.

Aave began as ETHLend in 2017 after it raised $16.2 million in an Initial Coin Offering (ICO) to create a decentralized peer-to-peer lending platform. Later, they rebranded to Aave when they switched to a liquidity pool model. Aave launched the Aave Protocol in 2020, an open-source and non-custodial liquidity protocol where users can earn interest on deposits and borrow assets.

As part of the LEND AAVE migration, tokens were swapped 100:1

LEND tokens will be used to govern Aave protocol. Features include proposing, voting and deciding on new additions, features, assets and to decide on the protocol parameters. Additionally LEND token is burnt based on the fees gathered by the protocol.

Aave’s shifted from a decentralized P2P lending strategy (direct loan relationship between lenders and borrowers, like in ETHLend) to a pool-based strategy. Lenders provide liquidity by depositing cryptocurrencies in a pool contract. Simultaneously, in the same contract, the pooled funds can be borrowed by placing collateral. Loans do not need to be individually matched, instead, they rely on the pooled funds, as well as the amounts borrowed and their collateral. This enables instant loans with characteristics based on the state of the pool. Flash Loans Aave also allows loans to be taken out without any collateral by creating logic that if it’s not repaid within the block time, the transaction gets reversed. These flash loans are designed to be used by developers to build tools that require capital for arbitrage, refinancing or liquidating purposes. An example would be if a user took out a loan on Maker and the collateral price dropped making it close to liquidation, they could use a flash loan to repay the Maker loan and receive their collateral back. They could then sell the collateral to repay the flash loan thus avoiding the liquidation penalty on Maker without ever needing to actually have the funds necessary for repayment. Rate Switching Another unique feature of Aave is that it allows borrowers to switch between fixed and floating interest rates. Interest rates in DeFi are traditionally volatile making it difficult to estimate the long-term cost of borrowing. If a user anticipates interest rates to rise they can switch their loan to fixed rate in order to lock in their borrowing costs for the future, and if they expect rates to decrease they can switch back to floating to then decrease their borrowing costs. There are two exceptions where the fixed rate can actually change and that is if the deposit earning rate increases above the fixed borrow rate because the system could get unstable by paying out more than its being paid. In that case, the fixed rate is rebalanced to the new stable rate. the other scenario which works in the borrower’s favor is if the variable rate is lower than the fixed rate by 20%, the loan will automatically decrease to account for the difference.