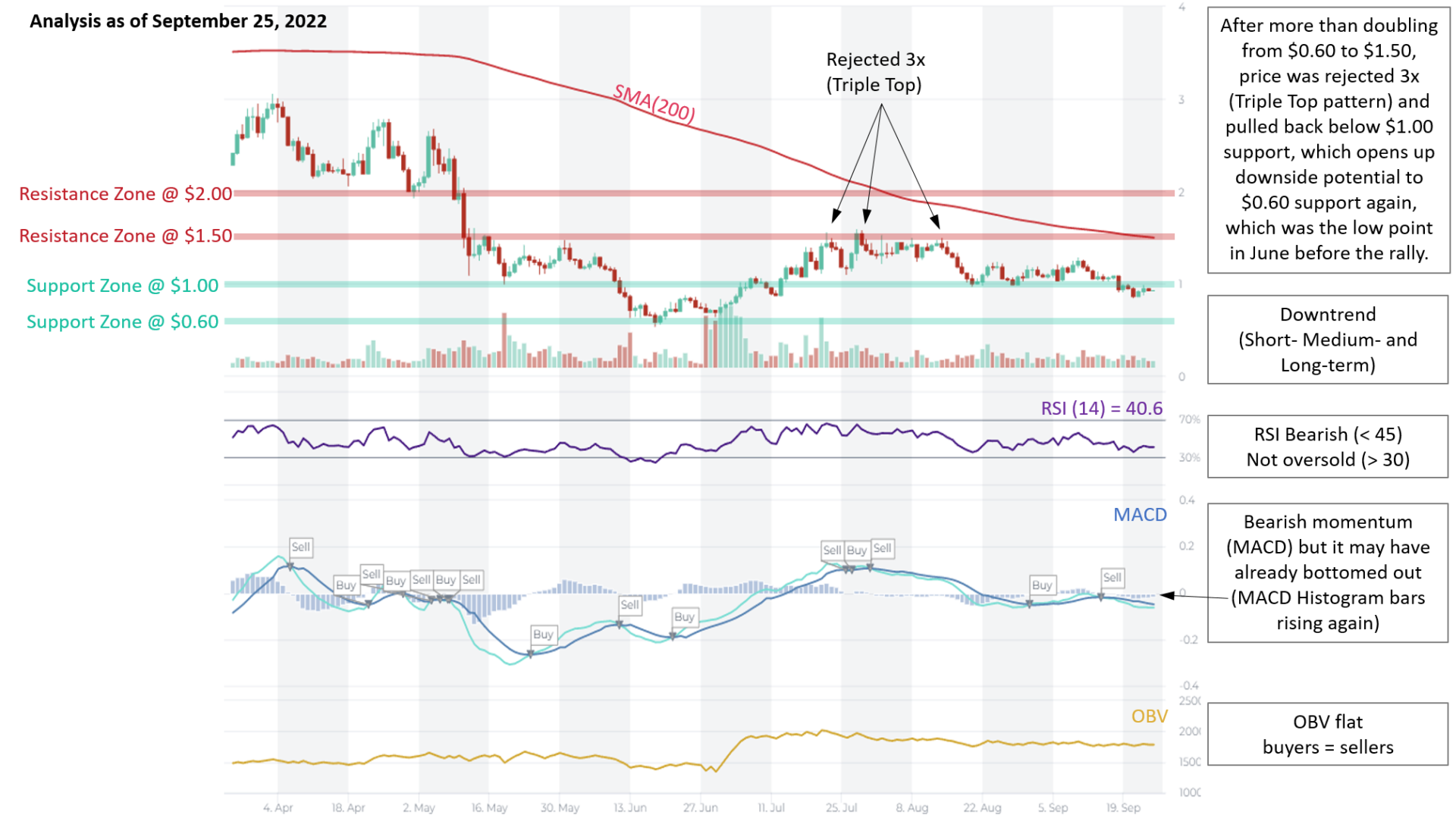 Trade setup: After more than doubling from $0.60 to $1.50, price was rejected 3x (Triple Top pattern) and pulled back below $1.00 support, which opens up downside potential to $0.60 support again, which was the low point in June before the rally. (set a price alert).

(Dec 26.2021) Curve DAO surges to monthly highs – does this uptrend have enough legs to keep going?

What is Curve (CRV)?

Curve Finance is a decentralized exchange optimized for low slippage swaps between stablecoins or similar assets that peg to the same value (e.g. wBTC/renBTC). The protocol employs a Automated Market Maker that was built specifically to give DeFi users low slippage and liquidity providers steady fee revenue.

The Curve protocol was built around stablecoin liquidity in order to provide steadier interest returns without having to hold a very volatile asset. Since its inception, Curve has been a top DEX by volume, offering traders ample liquidity at low fees and slippage. Currently, Curve has over 33 different liquidity pools that provide varying and changing returns depending on the weights of assets in the pool and their performance. Curve Finance began with the publication of Michael Egorov’s StableSwap Whitepaper in November 2019. The StableSwap whitepaper details the foundations of what eventually became Curve Finance protocol, which launched two months later in January 2020. A key part of Curve’s infrastructure is the CurveDAO. The CurveDAO is an Aragon-based Decentralized Autonomous Organization that controls Curve Finance. Votes are weighted by both the number of votes and the time of the vote – earlier time-locked votes are worth more. The DAO is governed by CRV (an ERC-20 token), Curve’s native governance token which launched in August of 2020. The launch of the Curve (CRV) token led to a surge of volume and helped Curve hit over $1 billion in Total Value Locked (TVL) for the first time. Curve aims to help liquidity providers maximize return while also minimizing trader fees, reducing price slippage, mitigate risk, and provide ample liquidity. It accomplishes this via unique tech and partnerships with other popular DeFi applications like Compound and Yearn Finance.

Constant Sum Constant Product AMM: The Curve protocol employs a unique Automated Market Maker that combines Uniswap’s constant product AMM with a constant sum AMM. Curve’s AMM equation is complex but the results are simple – low slippage on small to medium trades and decent liquidity on larger ones. Curves model, which provides a ‘middle-ground’ between constant price and Uniswap’s AMM model (x*y = constant product), achieves significantly lower slippage in prices on the demand side of the exchange. To learn more about Curve’s AMM Model see The Evolution of the Constant Function Market Maker Liquidity Providers: Curve operates via liquidity pools where two (or more) assets are deposited into a pool and traded against each other. Arbitrage keeps the prices of the assets even with prices on other exchanges and half of the 0.04% fee (taken from trades) is paid to LPs. The other half of the 0.04% fee is paid to veCRV holders. At higher volumes of trade the APY on deposited assets increases – more trades means more fees are being paid. Curve’s 0.04% fee is much lower than other exchanges, which could explain the high levels of trading volume it has hosted. All LPs receive CRV tokens in addition to the interest from fees. When depositing LPs should put assets in pools in an equal ratio (50/50). If they don’t the AMM equation will devalue one of the coins letting arbitrageurs bid some of the value out of their deposit. On top of the fee paid to LPs, Curve incentivizes deposits via rewards from other DeFi projects. Currently, protocols REN and Synthetix incentive LPs to deposit in pools containing their assets by giving LPs their respective tokens ($REN and $SNX). yEarn: Some of Curve’s pools, called yPools, are pools that have integrated with lending and borrowing protocols like Compound and Yearn Finance. yEarn is the algorithm that provides liquidity to these protocols and works to get the best rate of return on the lent assets. yPools lend funds to the protocols and in return, these pools give LPs rewards in cTokens and Ytokens. Much like a bank lends its customers’ savings in order to return them higher interest rates, Curve’s goal with this practice is to maximize rewards for those willing to provide stablecoin liquidity on their platform. Impermanent Loss: Impermanent loss is the loss that occurs to LPs when the price of one of the two assets that exist in a pool, say DAI/ETH, is more volatile than the other. If the price of one of the assets swings in relation to the other asset but does not change within the liquidity pool itself arbitragers can buy the asset from the pool and sell it on another exchange. LPs lose the gains made on their assets because the profit made from the bidding up of ETH was essentially drained by arbitragers. However, so long as the LPs do not withdraw their funds, the loss remains impermanent; the price of the asset could go back to its previous level, meaning the LPs would not have actually made any more money if they had just held the assets themselves. LPs are incentivized to deposit funds so long as the fees and yield paid to them exceeds the impermanent loss. Several DEXs, including Curve, are working on solutions to Impermanent Loss. Curve recently partnered with Peanut, a “DeFi price balancer”, to explore the possibility of preventing impermanent loss. Curve LPs typically have a much lower risk of impermanent loss – the only assets traded on Curve are stable so typically any impermanent loss would be negligible. Copy-cat: An EVM (Ethereum Virtual Machine) compatible version of Curve is being built on Polkadot. The team behind Polkadot’s Curve is not affiliated with Curve itself. Integrations: Curve Finance has integrated with 1inch, Paraswap, Totle swap Dex.ag, Debank, InstaDapp DSA, CoinGecko, Zapper.fi, Zerion, Pools.fyi, Spells.fyi, dydx, Etherscan, and CoinMarketCap.

Curve (CRV) is a governance token with time-weighted voting and value accrual mechanisms. Governance with time-weighted voting Value capture mechanism to promote certain pools Locking mechanism to accrue rewards for long term liquidity providers Fee burn (once enabled by governance further down the road) Curve (CRV), an ERC-20 standard token, is Curve Finance’s native coin for governance. The Curve (CRV) token controls the protocol and gives holders the ability to submit proposals and potential changes to the allocations of pools. Voters can examine each pool and decide on different allocations that may generate higher or more secure returns (APY). The amount of voting power a user has is determined by both the amount of Curve (CRV) tokens they stake and the amount of time they stake it. Users who have staked more tokens or for a longer period of time will possess greater voting rights. Users are incentivized to lock their CRV tokens within the protocol in return for veCRV tokens (vote locking address). Once these funds are locked for over a week, veCRV tokens will be available to vote for gauge weights. Also, those who lock CRV are entitled to fees generated by the protocol’s liquidity pools. Currently, one needs 2500 veCRV (the equivalent of 10000 CRV locked for a year) to be able to create a new vote. This voting boost for users who lock their tokens serves as an incentive for users to truly invest themselves in the future of the Curve DAO. Vote locking also increases ones’ CRV liquidity providing rewards.