We continue our series of technical analyses of top 50 market cap cryptocurrencies with a couple of DeFi darlings, Yearn.Finance (YFI), SushiSwap (SUSHI), as well as Verge (XVG), Nano (NANO) and Horizen (ZEN).

Generally speaking, after big runs that altcoins experienced in November along with Bitcoin (BTC), most are going through a consolidation phase, many forming symmetrical triangles with bearish breakdowns.  Some are sitting at critical Support Zones.  Traders should observe whether prices bounce and confirm these Support Zone, which could lead to resumption of an Uptrend to recent Resistance areas (20-50% higher).

YFI (Yearn.Finance) is in an Uptrend on all time horizons (Short-, Medium-, Long-Term).  Since early November, YFI started forming an upward channel. Price has been making higher lows and higher highs (bullish). Momentum has fizzled out a bit recently with RSI trending lower and in a bearish RSI divergence (price increased, but RSI declines). MACD has also flattened out.

Furthermore, it seems YFI formed a Symmetrical triangle in the past 2 weeks, confirmed by declining volume as it approached the pinnacle.  Symmetrical triangles are usually continuation patterns (i.e. continue with an existing trend) but they may also be reversal patterns. In this case, price broke downwards from the triangle.

Potential target of this triangle break can be measured by taking the distance of the two sides of the triangle, where it is the widest. This would mean the potential downside target is around $20K. If this were to materialize, YFI would basically reach the horizontal Support Zone.

OBV is declining recently, which confirms that supply from sellers has exceeded demand from buyers. ADX is between 20-40 indicating strong trend, but ADX is declining. 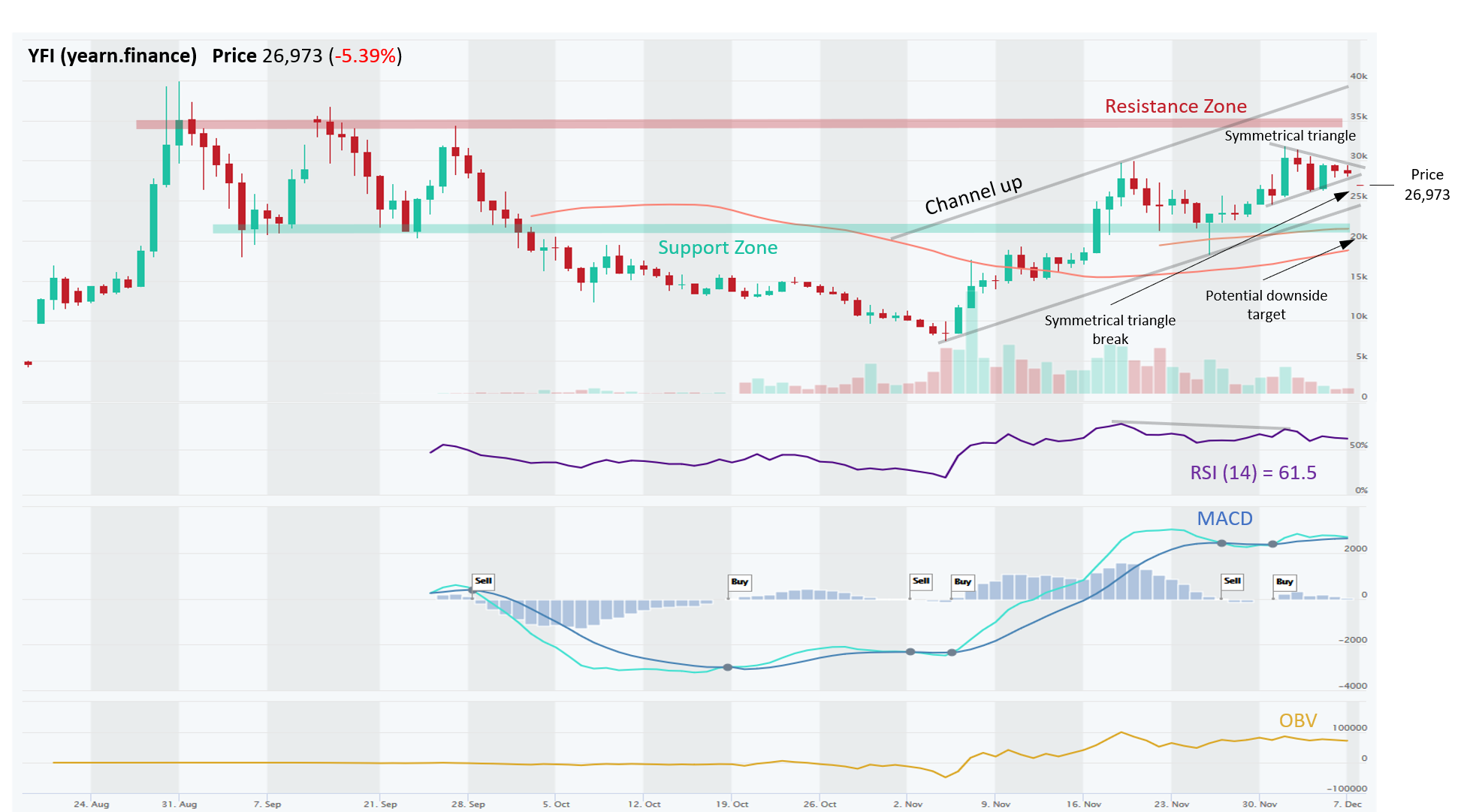 XVG (Verge) is in an Uptrend on all time horizons (Short-, Medium-, Long-Term).  Price attacked ~0.010 resistance, but failed to close above that level and has since retraced to ~0.006, a Support Zone.  During this consolidation period, momentum has naturally diminished with RSI and MACD pulling back. OBV (volume on Up days vs Down days) has also flattened out, indicating that buyers and sellers have reached a balance.  If this Support area holds, price could make another run at $0.010 (up 35%).  If it breaks down, the next Support is $0.005 (15% lower) or more formidable $0.004 (30% lower).  Traders should watch whether price bounces off the $0.006 Support Zone, ideally with solid volume, indicating that buyers see a bargain at these levels. 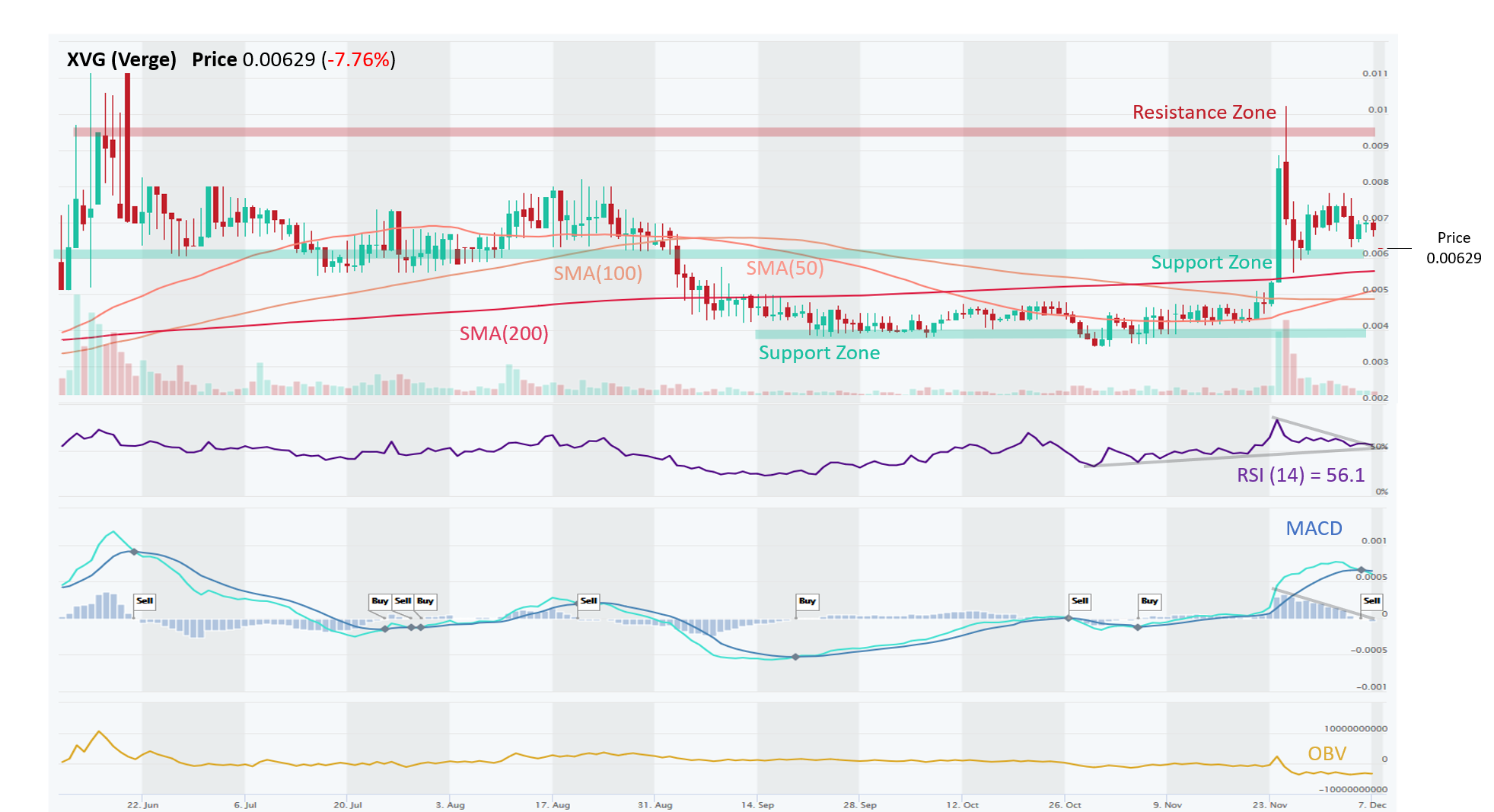 NANO (Nano) is in an Uptrend on all time horizons (Short-, Medium-, Long-Term).  Price went on a massive tear in late November and has been consolidating since then in a Symmetrical Triangle pattern.  Notice the characteristic decline in volume as the pinnacle approached.

Symmetrical triangles are usually continuation patterns (i.e. continue with existing trend), but they may also be reversal patterns. In this case, the price broke downwards from the triangle.

Potential target of this triangle break can be measured by taking the width of the triangle. This means that the potential target is around $0.70, which coincides with a strong Support Zone.  It would a major reversal, that would obliterate the current Uptrend.

Before then, however, watch the $0.90 Support Zone.  If it holds, it could resume its Uptrend and revisit the $1.40 Resistance Zone.

Momentum has clearly been broken during the current correction, with RSI declining and MACD making a bearish crossover.  Similarly, OBV has rolled over, which confirms that supply from sellers has exceeded demand from buyers.

SUSHI – Remains In a Solid Up Channel, Bucking the General Altcoins Malaise

SUSHI (SushiSwap) is in an Uptrend on all time horizons (Short-, Medium-, Long-Term).  Price action turned around in early November and started to form an Up Channel, with nice Higher Highs and Higher Lows.  Signature Uptrend.

Momentum remains bullish, with RSI > 50 and a bullish MACD Crossover. On the caution side, both RSI and MACD have not reached the same highs they did in mid-November (last upswing).  So momentum is bullish but not rising.

We’re likely to see the price retrace to the Trendline Support level (cca $2.00) before continuing in the Up Channel.

OBV (volume on Up days vs Down days) is trending steadily upward, confirming that demand from buyers exceeds supply from sellers. ADX is between 20-40, indicating that trend is strong. 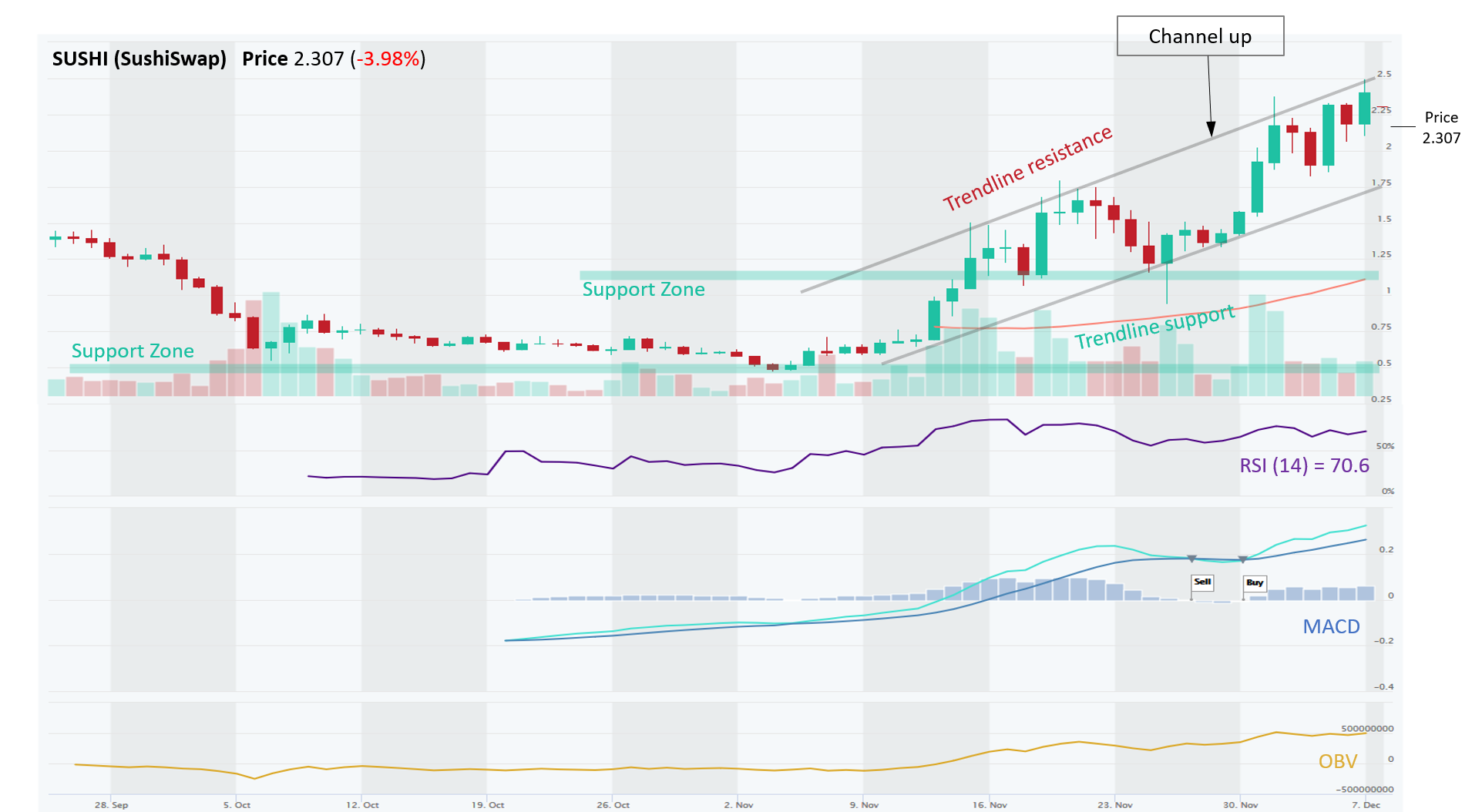 Momentum has rolled over, with RSI declining and MACD making a bearish crossover on Dec 5.  OBV (volume on Up days vs Down days) is also declining now, showing that supply from sellers exceeds demand from buyers.

All of these indications put the $11.00 Support area at risk 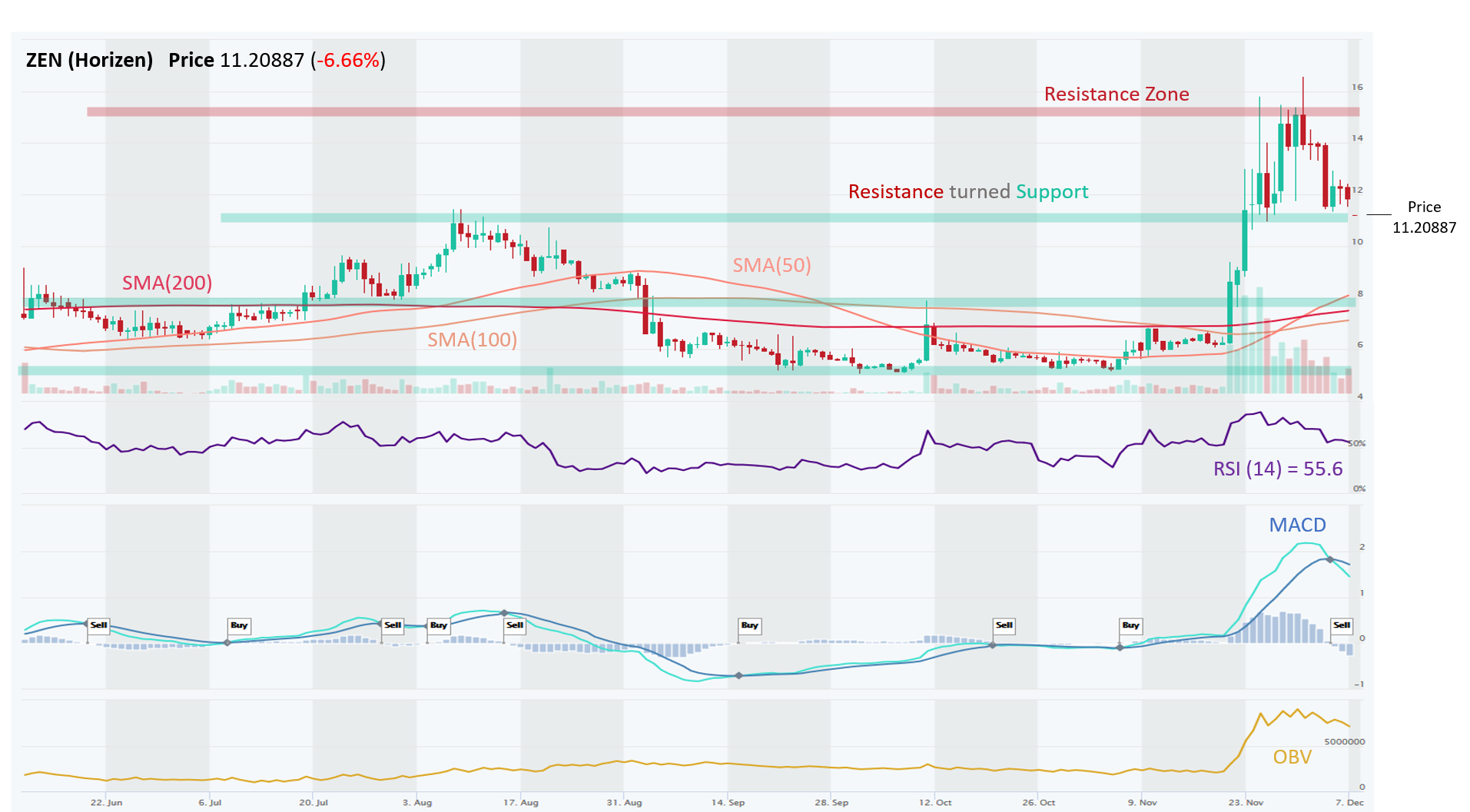