PayPal’s user base could generate demand for over 15% of Bitcoin’s current market cap over the next 12 months.

By now, most of us have heard that PayPal has begun to enable buying and selling of cryptocurrencies in recent weeks in the U.S. and will roll it out to select international markets in the first half of 2021.  Initially it includes four crypto staples: Bitcoin (BTC), Bitcoin Cash (BCH), Ethereum (ETH) and Litecoin (LTC).

It cannot be overstated that this is a major leap in crypto’s utility. Over 361 million active PayPal users will be able to use their cryptocurrency balances to pay for goods and services with 26 million merchants worldwide!

For investors, this means that these four cryptocurrencies will enjoy big demand tailwinds in the next 6-12 months as PayPal users, especially millennials, begin to buy up these coins.  And we suspect that other digital payment card competitors to PayPal and Square (Cash App) are not far behind in their own cryptocurrency initiatives.

Since PayPal’s announcement on Oct 21, Bitcoin’s price has gone up 50% from $12K to $18K.  Sure, there have been other catalysts (institutional and corporate allocations to Bitcoin), but we believe that PayPal is the main reason behind the recent gains.  And it is just the beginning.

General public is eager to dip their toe in the digital assets, but for most, it remains out of reach due to its complexity and security concerns.  PayPal takes all that complexity and uncertainty away.

We expect the demand for the four select cryptocurrencies could drive their prices substantially higher over the next 6-12 months.

How much BTC could PayPal’s user base buy?  As of Nov 2, only 10% of PayPal users in the U.S. had access to the crypto services, and as of Nov 12, it was rolled out to all U.S. users.  Citing big demand, PayPal raised the maximum amount a user could buy from $10K per week to $20K per week.

And the buying has clearly begun.  PayPal’s volumes are going through itBit exchange (owned by Paxos, US-based and licensed).  Notice how their volume has tripled in recent weeks from an average of $5.6M a day to $15.7M average, even reaching $31M on Nov 17!

To gauge future BTC demand from PayPal user base, we can do some quick math using Square (Cash App) as a guide.  Square enabled Bitcoin buying starting in 2018, which was the “crypto winter” post the ICO bubble in late 2017 / early 2018.  Activity really began to pick up in 2019 and accelerate in 2020. 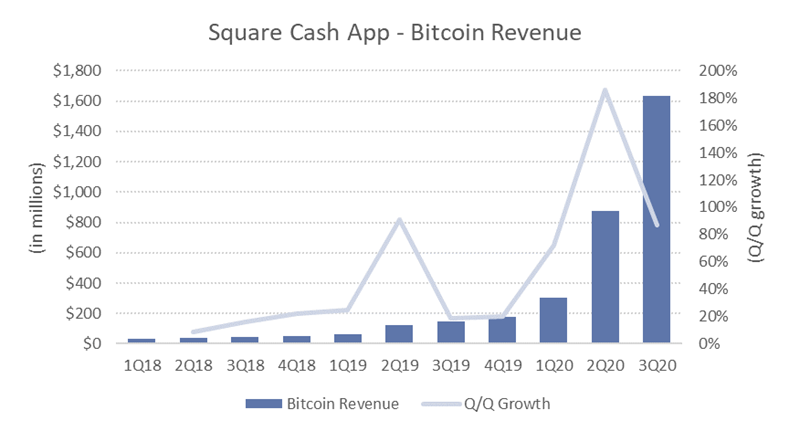 Square has about 30M users on its Cash App, which enables Bitcoin buying.  In 3Q20 (ending September 30), Cash App users bought $1.63B worth of Bitcoin or $54 per user on average, and that was up 87% from prior quarter.

If we assume that PayPal’s user base buys the same amount of $54/user, that means that 361M users could buy $19.7B worth of Bitcoin.  Is that meaningful?  You bet it is. Bitcoin’s current market cap is $326.8B.  PayPal’s users could generate demand for 6.0% of Bitcoin’s market cap! That would move the price, and we are seeing that already.

But let us look ahead a little.  Square Cash App users’ spend on Bitcoin was up 87% in 3Q20 from prior quarter and it is not unreasonable to expect high double digit growth in 4Q20 and throughout 2021 to about $122 average per user in 4Q21.

With these growth assumptions in average spend per user, we can easily foresee PayPal users generating demand for 15% worth of Bitcoin’s market cap at the current price.  Importantly, PayPal users are not traders, they are investors, aka HODLers.   Hence, a sizeable portion of Bitcoins could be removed from the market, creating even greater scarcity. 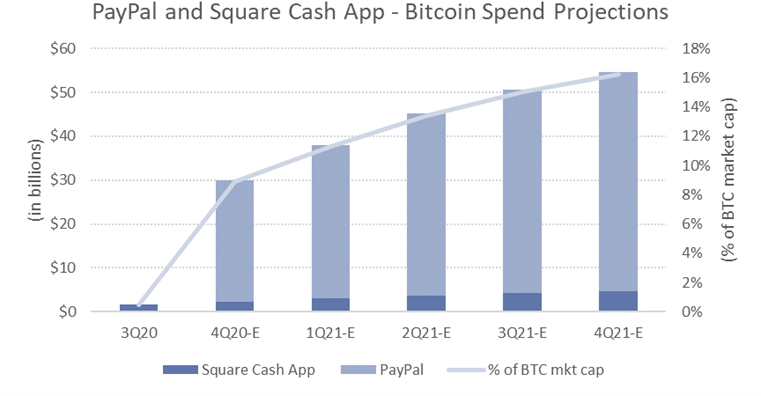 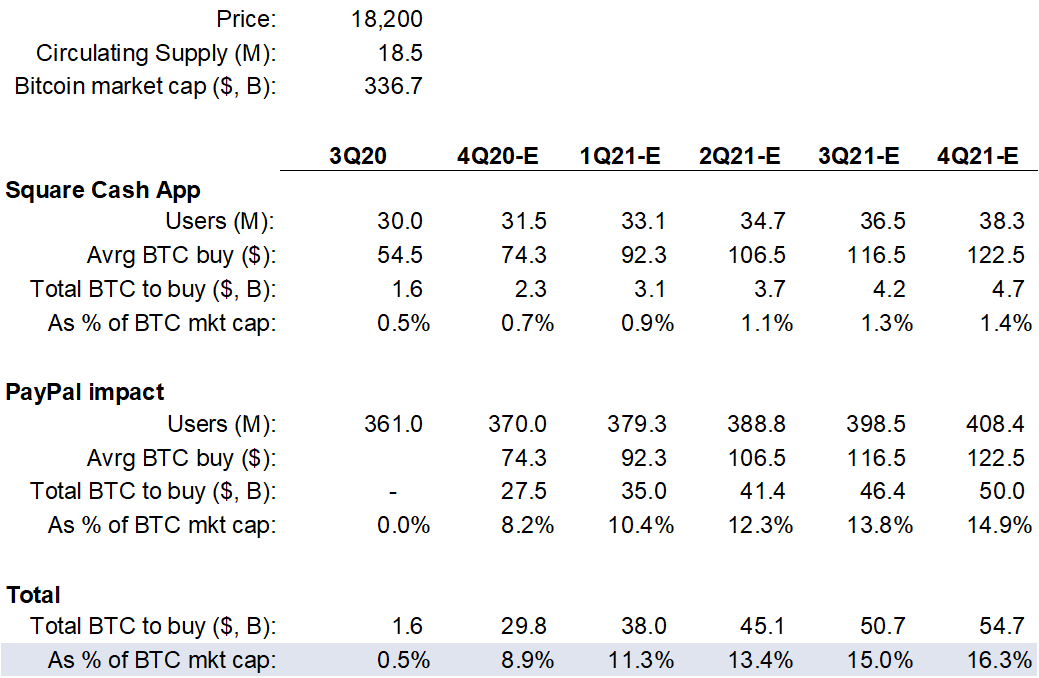 And what happens when all the other PayPal competitors match this move?  And when neobanks like Monzo, Atom Bank, Tide, Chime, Simple, N26, Monese join PayPal’s move?  And if we layer on demand from institutional investors and corporations that are gradually allocating just a few percent of their assets into digital assets….Bitcoin will moon.