Since there are no fundamentally established methods of valuing BTC, analysts keep inventing ways to value it.

Realized value is essentially the value of each Bitcoin at the last time it was moved. This information is possible to know, as each Bitcoin block has a timestamp. If we know the time the Bitcoin moved, we can look at price of Bitcoin at that particular time. For example if you bought BTC in 2017 for $5,000 and your coin has not moved since then, the realized value of that Bitcoin is $5,000. This essentially helps us to analyze what was the price of Bitcoin, which investor deemed “appropriate” to move their coins, thus “realizing” the value.

When we make a ratio of these two inputs, we get the MVRV ratio, as shown on the graph below. 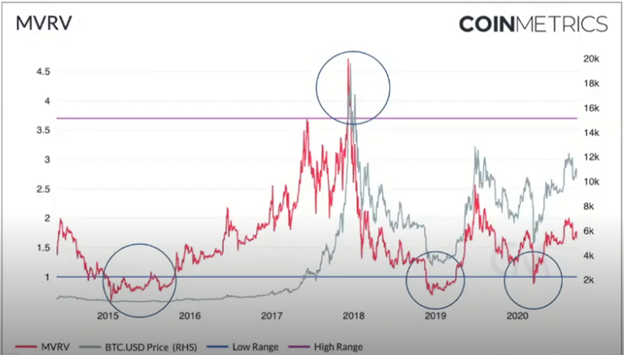 The higher the MVRV ratio goes above 1, the greater is the market value of the Bitcoin network relative to the value the Bitcoins were last moved (bought/sold), so it means investors are holding at profit.

Due to Bitcoin’s volatility this ratio expanded to almost 4.7 in late 2017. This means that investors on average were almost 400% in profit. This could only signal potential for booking profits and price falls and it did.

Conversely, when the MVRV ratio is below 1, it means that perhaps investors are too quick moving their coins relative to their market value, potentially pointing to undervaluation. Also, it means that investors are holding at a loss. Such periods may be good for accumulation of Bitcoin, say 2015, 2019, or even 2020.

Currently the MVRV is around 1.7, which means investors are holding at profit, but based on history, there is ample room to run.

Thanks to Bitcoin network’s open source nature, we know there are currently ~18.5M Bitcoins in circulation, and there will only ever be 21M produced. However, how many of those ~18.5M are forever lost? How many are truly available to be traded? The free float supply attempts to answer this question.

Coin metrics has developed a way to estimate the Free float supply by removing coins that did not move in the past 5 years (including Satoshi’s coins), coins that were burned or probably lost, and coins belonging to long-term strategic holders.

Naturally, as time goes on, more and more coins are lost, as people lose their private keys, send their coins to wrong addresses.

According to Coin Metrics almost 4M coins are lost, so the true supply of Bitcoin available to be traded is ~14.5M. This is a bullish signal for Bitcoin, as the coin is even more scarce as was thought of. 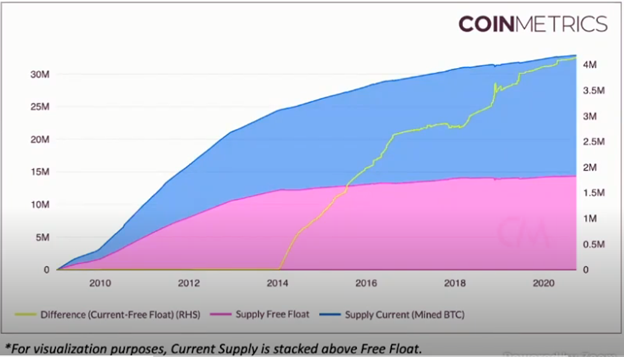 SOPR appears to oscillate around 1, potentially due to the fact that investors are reluctant to sell at a loss (SOPR below 1). This can act as a price floor. Historically, SOPR below 1 was bullish and above 1.2 bearish.

The graph below plots SOPR of all spent outputs and aggregates them by the day they were spent. 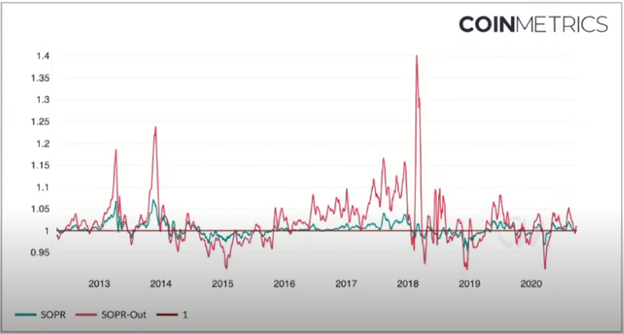