Pattern: Price is trading in a Channel Down pattern. With emerging patterns, traders who believe the price is likely to remain within its channel can initiate trades when the price fluctuates within its channel trendlines. With complete patterns (i.e. a breakout) – initiate a trade when the price breaks through the channel’s trendlines, either on the upper or lower side. When this happens, the price can move rapidly in the direction of that breakout. 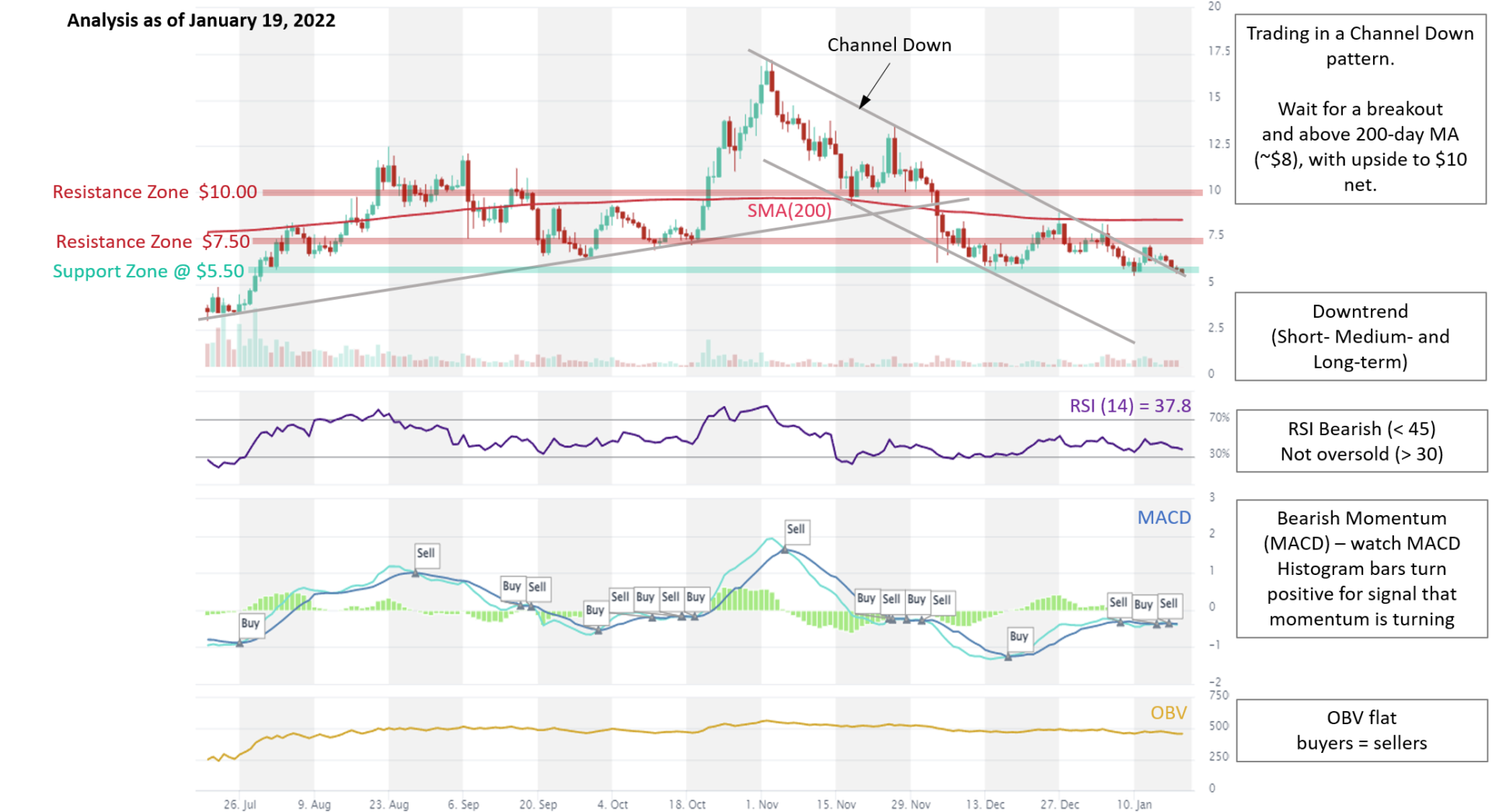 What is THORchain (RUNE)?

THORChain is an independent blockchain built using the Cosmos SDK that will serve as a cross-chain decentralized exchange (DEX). It uses an automated market maker (AMM) model that resembles the first iterations of Bancor (BNT) or Uniswap where THORChain’s native token (RUNE) will be the base swap pair. This model allows traders to move between different asset pools using RUNE as a somewhat hidden intermediary. It also rewards liquidity providers (LPs), those that deposit or “stake” assets on either side of a liquidity pool, with a portion of trading fees. It uses an AMM model to facilitate cryptoasset swaps an independent cryptonetwork that aims to enable the exchange of assets across disparate blockchain networks in a non-custodial manner. Its protocol features a cross-chain bridge system (known as the Bifröst Protocol) to connect different chains. THORChain also uses an adapted version of Bancor’s “smart tokens,” which it calls Continuous Liquidity Pools (CLPs), to facilitate the exchange of assets. The key difference is that CLPs reward users for contributing to the liquidity in each pool. THORChain features a native token, RUNE, that owners can use to participate in the network or add to a liquidity pool.

The THORChain project was founded in 2018 under the premise that the use of centralized exchanges to transfer cryptoassets between different blockchains was flawed. Non-custodial exchanges, otherwise known as decentralized exchanges (DEXs), were the long-term solution. Therefore, the THORChain team set out to build an independent blockchain that could bridge to external networks and thus facilitate cross-chain transfers, functioning similarly to a DEX. The problem often facing DEXs is finding sufficient liquidity. Traders gravitate towards platforms where they won’t lose any value due to slippage. But these same traders are the ones to provide enough liquidity to prevent slippage in the first place. In response, the THORChain team plans to implement an adapted model of Bancor’s “smart token” to create what it calls Continuous Liquidity Pools (CLPs). These pools of available assets give traders access to liquidity without needing to find or contact another buyer or seller. THORChain also distributes rewards in the form of RUNE (the network’s native token) to any user that adds tokens to a liquidity pool. At the same time, token owners can stake their assets and earn the fees accumulated from other users accessing the pool. THORChain is a Tendermint-based chain, and therefore uses Tendermint BFT (Byzantine Fault Tolerance) as its consensus mechanism. It also employs Proof-of-Stake (PoS) for Sybil resistance. As part of the PoS element, a system of validators can stake RUNE tokens to run network nodes and validate transactions. THORChain allows token holders to delegate to these validators, which keeps validators in check and permits delegators to a portion of each block reward. The project is looking to launch its mainnet at some point in 2021. It has also launched an AMM on Binance Chain called BEPSwap.

THORChain uses a series of core technologies to ensure the network functions as designed: Tendermint Continuous Liquidity Pools (CLPs) Bifröst Protocol Yggdrasil Protocol Tendermint THORChain is a Tendermint-based chain, which is the same architecture and consensus system first used by the Cosmos network. Tendermint employs its own BFT (Byzantine Fault Tolerance) consensus mechanism that relies on synchronicity. Therefore, like Cosmos, THORChain caps the number of validators (100 to start) in order to reach finality for each proposed block. It also supports a Proof-of-Stake consensus mechanism since Tendmint requires each Validator to have a weight on the network determined by the stake they hold. Continuous Liquidity Pools (CLPs) The THORChain team plans to implement an adapted model of Bancor’s “smart token” to create what it calls Continuous Liquidity Pools (CLPs). This system incentivizes participants to supply liquidity in exchange for fees and RUNE rewards. Traders can then access and exchange with these token pools directly, which gives CLPs an on-going supply of liquidity. The protocol also tracks the ratio of RUNE to the asset held in each CLP, which creates an inherent on-chain price feed for individual assets. Bifröst Protocol The Bifröst Protocol is THORChain’s cross-chain bridging system. The protocol leverages THORChain’s Proof-of-Stake (PoS) validator set, the on-chain price feeds generated by CLPs, multi-signature (multi-sig) accounts to create and secure these bridges. Every bridge uses validating parties to verify transactions. But the multi-sig system randomly assigns validators to each transaction to limit centralization concerns. Each bridge is customizable, where the end-user determines the number of parties required to sign-off on a transaction (a three-of-four multi-sig arrangement is less secure but faster than a 20-of-21 schema). The Bifröst Protocol also uses the on-chain price feeds created by CLPs to give each bridge a security profile (how likely is a bridge to fail) and to identify and punish bridge validators that act against the network’s rules. Yggdrasil Protocol The Yggdrasil Protocol is a sharding mechanism designed to help scale THORChain. Unlike more traditional sharding applications, which split items into horizontal components, the Yggdrasil Protocol uses a vertical sharding technique on entire chains. The team says this technique allows THORChain to apply sharding to cross-chain ecosystems, as opposed to sharding an existing chain. As for shard consensus, THORChain does not engage the full Validator Set to monitor each shard. Only a subset of validators will finalize cross-shard transactions. But the others will be able to monitor the consensus reached on every shard.

RUNE serves a crypto-economic function within the THORChain system by providing incentives and deterrents for network participants. Some uses for RUNE include: Validators must stake RUNE to be part of the Validator Sets, which are subject to a lockup period to prevent nothing-at-stake attacks All network transaction fees (gas or “fuel” for changing the protocol’s ledger) are paid in RUNE. The network can require fees for executing transactions, trades, and cross-chain exchanges. Staking RUNE in Continuous Liquidity Pools (CLPs) to earn on liquidity fees Block rewards for Validator Nodes are paid in RUNE.

RUNE initially had a 1 billion max supply when tokens were first minted in Jun. 2019. But in Oct. 2019, the project opted to burn all of the “unused” reserve RUNE, which, when combined with the tokens burned through Project Surtr, amounted to 50% of the initial max supply. The supply reduction did not impact the tokens already distributed to Pre-Sale and Initial DEX Offering (IDO) investors. The allocation of the original and post-burn amounts, along with their vesting schedules, are as follows: Service nodes & liquidity incentives: 220,447,472 RUNE (initially 500 million) of ongoing emissions through validator rewards and liquidity pool provisioning incentives Operational reserves (THORChain company): 65 million (initially 130 million) that vest monthly over 40 months (3.5 years) since initial distribution. THORChain may also use tokens from this pool for OTC sales to strategic partners. Community reserves (RUNEVault): 60 million (initially 120 million) emitted over 2.5 years through the RUNEVault rewards program and airdrop events Team & Advisors: 50 million (initially 100 million), which are locked until mainnet launch, then released in 20% batches every three months Seed investors: 30 million (initially 60 million), of which four million were distributed immediately. The rest of the tokens will remain locked until mainnet launch, then released in 20% batches every three months Pre-Sale (Private Sale) investors: 70 million. 50% of this pool was unlocked upon distribution to provide enough liquidity on Binance DEX. The other half unlocked one week after the close of THORChain’s initial DEX offering (IDO). Initial DEX Offering (IDO): 20 million, of which 13 million went unsold and were later burned, that came with no vesting schedule Ongoing emissions THORChain includes a few ongoing emission models to incentivize network participation: RUNEVault issues two million RUNE tokens each month as part of its staking rewards program. This issuance will continue until the Community reserves (60 million total tokens) runs out, which would allow the RUNEVault program to operate for about 2.5 years after its launch. Note that THORChain could revisit this model in the future with community input to reduce reserve emission. Service nodes and liquidity provisioners will receive monthly distributions equal to the below block rewards calculation. Two-thirds of this block reward will go to service nodes (aka validators), and the remaining third will go towards liquidity incentives. Block rewards will continue until this bucket’s max supply of 220,447,472 RUNE is reached. blockRewardsPerMonth = maxSupply – circulatingSupply) / (6 * 12) Project Surtr (The RUNE burn program) THORChain introduced Project Sutr in Aug. 2019, which aims to burn any unused RUNE from the various token reserves. On the 20th of every month, the team gathers input from the community to determine whether unallocated RUNE should be burned. Our Liquid Supply Curve does not include tokens removed through the burn program, as the total burned each month is unpredictable.